When a person has a bad experience or is under stress, a common reaction is to seek help and solace from friends. Sometimes such a friend has four legs and a wagging tail. For nearly a century, dogs have been used as service animals. They help guide people who are visually impaired and assist those with other physical disabilities. They can also detect seizures and fetch medications as needed.

Therapy dogs fall into a different category. These animals are brought in to comfort those who have been victims of a crime or other trauma. They provide companionship and support to military veterans with post-traumatic stress disorder (PTSD), they uplift the spirits of those who are sick, and they help first responders open up about the violence they have witnessed. 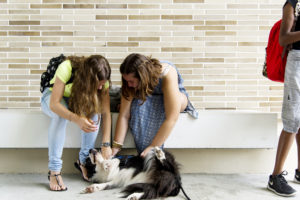 In September 2016, the Saint Leo community grieved the loss of Alex “Pancho” Carrera, a University Campus student who passed away. In addition to receiving aid from Counseling Services and University Ministry, many students were comforted by Kashew, a border collie. Dr. Debra Mims, an assistant professor in the Criminal Justice Department, is Kashew’s owner and trainer. She has four therapy dogs (as well as three agility dogs and a cadaver dog), and she knows the benefit that therapy dogs provide.

“Alex was a student in one of my classes, and I believed the students would like having Kashew with us as we met for the first time without Alex,” Dr. Mims said. Just the process of petting a dog can help people relax and cope, she explained.

“Dogs are my therapy, too. … They help me clear my mind.”
—Dr. Debbie Mims

A retired police officer, Dr. Mims entered law enforcement following a family tragedy: the murder of her grandparents in their home. That experience—including working with victims advocates and attending a homicide support group—was life changing. She became a police officer in 1989, starting in the Plant City (FL) Police Department, and then transferred to the Tampa Police Department in 1993. During those two decades, she served as a member of the mounted unit and the bicycle squad; was a child abuse, elder abuse, and domestic violence investigator; and acted as a community service officer. Upon her retirement, she joined Saint Leo as a criminal justice instructor and went on to earn her doctorate. She wrote her dissertation on using therapy dogs to help victimized children talk about sexual abuse.

Handling therapy dogs comes naturally to Dr. Mims. She grew up around dogs and other animals, and was active in 4-H. She has seen firsthand how smart canines can be—and how critical they are in assisting with humans’ recovery.

Dr. Mims is a certifier for the Alliance of Therapy Dogs and helps dog owners determine whether their pets are cut out for the job. Therapy dogs need to have a calm and understanding demeanor. They need to tolerate physical discomfort, such as when a child might squeeze just a little too hard. And they need to have stamina for long days at a hospital or nursing home. Some dogs, even if they are well trained, may not be suitable, she explained. If they are easily excited or have too much energy, they might react too enthusiastically to people or be spooked by loud noises and quick movements. 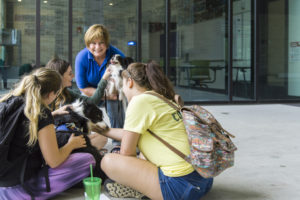 In addition to Kashew, Dr. Mims’ other therapy dogs are Disco (another border collie) and Rascal and PePe (both papillons). She finds that the smaller dogs are often best suited to young children, while adults may favor the mid-sized border collies, but every situation is different. She and the dogs work with a volunteer critical incident stress management (CISM) group that has been called to crises throughout the country. The group responded to Oklahoma City bombing in 1995, the Columbine shooting in 1999, as well as to the 2016 Pulse nightclub shooting in Orlando, FL. In Orlando, 911 operators and first responders were able to talk about their experiences and emotions, encouraged by petting and interacting with the dogs.

Dr. Mims and her dogs also volunteer in Judge Lynn Tepper’s court in Pasco County, FL. Children come to family court on Wednesdays, and the dogs sit with them outside, providing companionship before they talk to the judge and testify.

One thing that Dr. Mims particularly likes about working with her therapy dogs is that they are always willing to try new things. “I like new things, and I never settle,” she said.

In addition, as she balances life as a professor, wife, and mother, “Dogs are my therapy, too,” she said. “They help me clear my mind.”