Lacrosse alumni share their knowledge with college and high school players on the field and off.

Saint Leo University’s lacrosse programs are producing alumni who still are racking up accomplishments on the field, but they now are experiencing it from a coach’s vantage point. Building relationships and connecting with young people are just two of the benefits coaches reap while guiding athletic teams.

“When players join our team, there is a mutual investment,” said Brad Jorgensen, men’s lacrosse head coach. “We are counting on them helping us win games and represent Saint Leo, and they are counting on Saint Leo preparing them for the rest of their lives.”

Today, several Lions, now living across the country, are making the most of what they learned on the lacrosse field and in the classroom at the university. 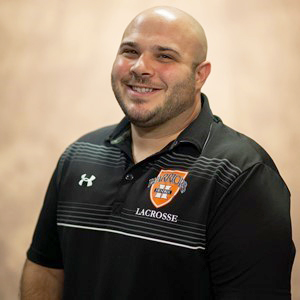 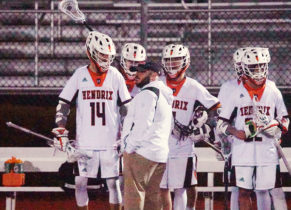 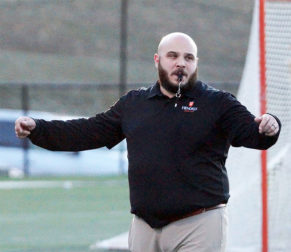 Alumnus Anthony Biondo serves as the head men’s lacrosse coach at Hendrix College in Conway, AR, where in his first year as head coach in 2017, the Warriors set a school record with eight wins. Biondo earned his bachelor’s degree in middle grades education from Saint Leo in 2009.

“My education background helps with my approach to everything we do here,” Biondo said of his coaching experience at Hendrix. As he learned at Saint Leo, reaching young people can take several different approaches.

“It is my goal to ensure we are teaching our young men, and finding ways to break it down into little nuggets,” he said. “We try to reach our players in different ways; whether it is hands-on [field application], visual, or audio, we try and make sure we hit everything as a staff to ensure the information reaches the players.”

Not only does Biondo coach on the lacrosse field, but he also runs the leadership council and manages the budget for the program. “The job of being the coach is truly being a jack-of-all-trades,” said Biondo, who also maintains his team’s social media presence and recruits new players.

One of his biggest takeaways from his time in a Saint Leo uniform is that details matter.

“Coach Jorgensen was always on us about the little things, and making sure we did them, and teaching us to do them the right way,” Biondo said. “During my time there, I was able to grow and find my focus for my career. My professors in the education department taught me so much about how to connect with my students/players and to always approach it with a fresh mind every day.” 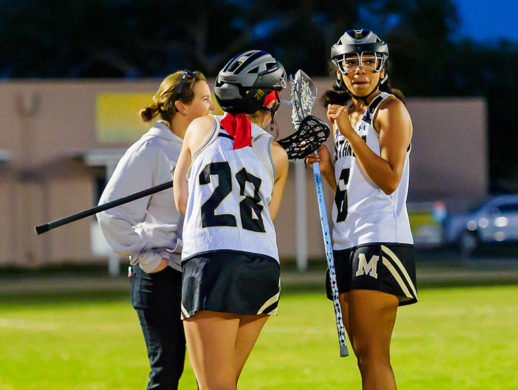 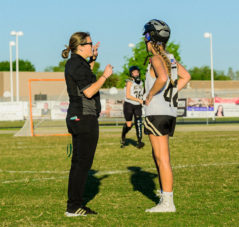 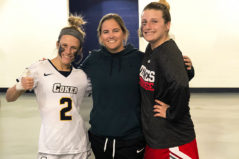 Linsey Hoskins ’14 has come full circle as she graduated from J.W. Mitchell High School in New Port Richey, FL, and now is the head girls lacrosse coach for the Mustangs. She also coaches the Tampa Tribe club team.

Hoskins earned her bachelor’s degree in biology with a minor in forensics/criminology. Now, she is teaching biology at Mitchell as well as teaching a new forensics class.

“I use my degree every day,” Hoskins said, “Since I teach the subjects that I studied. It is great just having the background knowledge. I use my real-life experiences and my different lab experiences.”

Hoskins was a walk-on player for the Saint Leo women’s lacrosse team, and she credits athletics for getting her through school. “I chose Saint Leo first and the sport came secondary,” she said. “It kept me focused. I probably wouldn’t have stayed in college if I hadn’t played a sport. Having the resources that Saint Leo offered to keep me focused, kept me in school. I may not have got those [resources] at a bigger university.”

As a coach, Hoskins said, she loves “just being able to bring the game that took me through college to other girls.

“It is important for those of us who did play at a high level to pass that along,” she continued.  “We need more role models for these young women. I love it.”

Saint Leo women’s lacrosse head coach Caitlin Hansen could not agree more. “I view coaching as an investment in growing the game,” Hansen said. “Lacrosse is a rapidly growing sport, and it’s one where we always are looking for people who have played to join the coaching ranks and give back. I think that investment in the future of the game is important.”

Two alumni who played on the Saint Leo men’s lacrosse national championship runners-up team are Kyle Pauwels and Jake Gilmour. Both earned their bachelor’s degrees in management in 2018, both are pursuing master’s in business administration, and both are coaching. 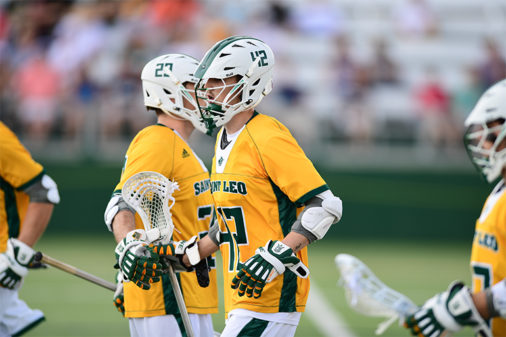 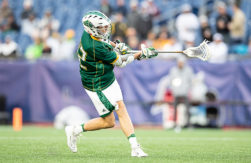 Kyle Pauwels in action at the national championship 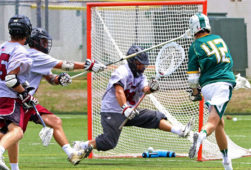 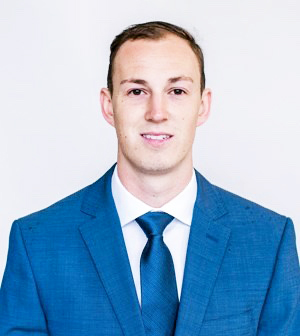 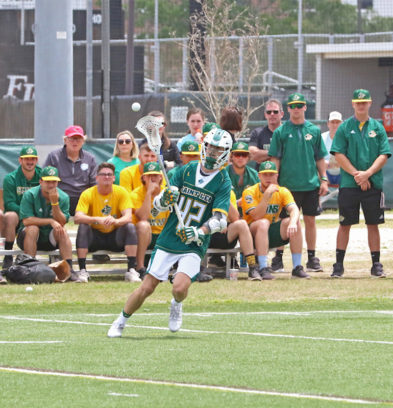 Kyle Pauwels on the field

Pauwels is an assistant men’s lacrosse coach at Lincoln Memorial University in Harrogate, TN. “With my undergrad degree being in management, there are a lot of concepts that apply to the business side of things along with coaching,” he said. “When managing a company or team, you come across dealing with different people and how you can lead them to success. There is also a lot of business and finance that comes with coaching, so my degree helped me prepare for the behind-the-scenes stuff in regard to booking hotels, ordering food and equipment, and more.”

As a coach, Pauwels said he loves giving back what he learned during his playing days. “I enjoy being around this age group and having an impact on them in any way possible,” he said. Like Biondo, Pauwels said taking pride in doing the right thing and doing something well were values instilled in him by Jorgensen, the Lions coach. 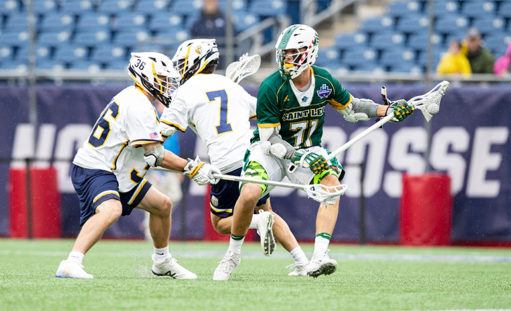 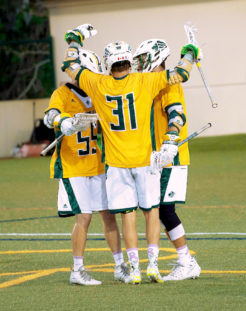 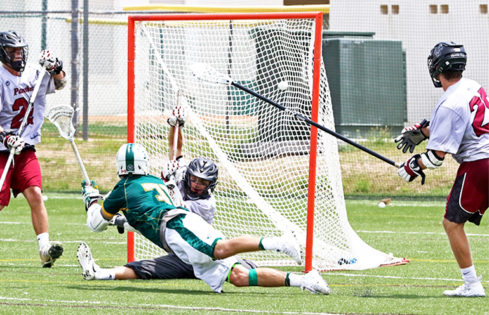 Jake Gilmour going for the goal 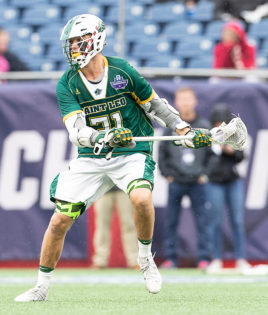 Jake Gilmour in action for the Lions at the national championship

Gilmour was drafted by the Denver Outlaws to play professional lacrosse and plays for Major Series Lacrosse League in the summer. Because of the coronavirus pandemic, he is waiting to hear about this year’s schedule. He also is a graduate assistant for Career Services at Saint Leo and co-head coach for the Wesley Chapel (FL) High School boys lacrosse team.

In addition, he helped with Lions lacrosse. “It was really cool and fun to be a part of all the other aspects and see it from a different perspective,” Gilmour said.

“I’ve actually been coaching for several years, as I coached summer clinics for the team I played for [in Canada],” he added. But while that coaching experience was only for a weekend, he enjoys coaching the Wildcats high school team.

“I enjoy being able to see the development of the players as they progress, and how their love of the game grows,” Gilmour said. “And obviously, I still have a passion for the game.”

In Career Services, Gilmour helps students discover what they need to be career-ready and what different work environments are like and also helps with their internships. During this time of online learning, Career Services also moved online, and Gilmour hosts virtual workshops and drop-ins for Saint Leo students.

His Saint Leo degree provided a solid foundation, Gilmour said. “A lot of what I learned is time management,” he said. “I handle my everyday job and balance high-school coaching and college coaching on the side. You have to get your act together pretty quickly!”

Pauwels and Gilmour share a favorite Saint Leo memory—playing for a national championship. “Really my whole senior year,” Pauwels said. “From being unranked to making it to a national championship was surreal. Our team came together so much on and off the field over the year. That whole season is still as clear as day.”

“Having former players get into coaching is one of the highest compliments I can receive,” Jorgensen said. “To know that guys thought highly enough of the experience here at Saint Leo to want to spend their lives involved in lacrosse is really rewarding.”

Hansen said she thinks coaching is an investment in developing future leaders. “If you can build relationships and connect with these high school and college players, you can really push them to not only be their best selves on the field but in all other aspects of their lives as well.”

Those lessons have paid off for the alumni who are coaching. All said they want to continue coaching, teaching, or being involved in lacrosse and sports in some way.

Gilmour summed up Saint Leo’s culture and its effect on him: “It’s based on respect,” he said. “The world is a lot bigger than lacrosse, but it all begins with respect.”

Mary McCoy is the senior editor and media relations manager for Saint Leo University in the Office of Brand Marketing and Communications and has worked at Saint Leo since October 2014. She earned her bachelor’s degree in journalism from Bowling Green State University (OH).