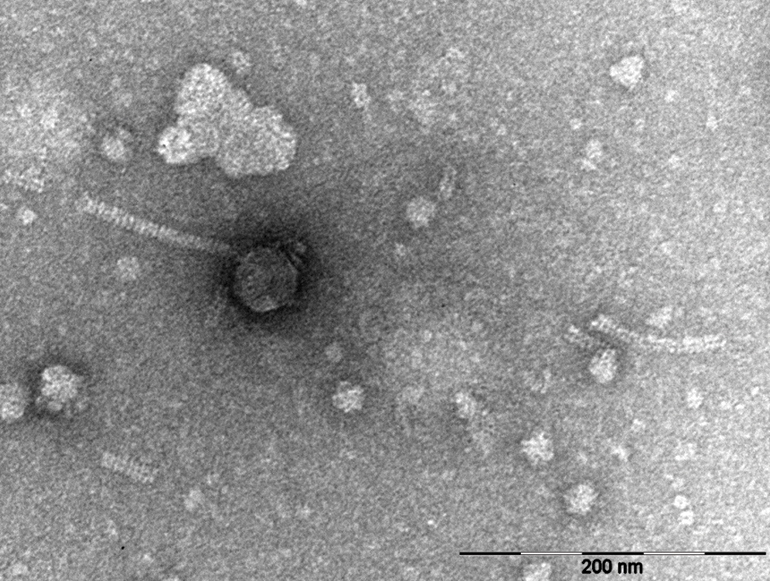 This image shows the dimension of the capsid and tail of the phage. It was produced using electron microscopy.

It’s hard to cram a graduate degree program, a full-time teaching job, and caring for a little one into one schedule, but Nicholas Finch ’20 managed to do it. And along the way, he nurtured his love of writing.

The 26-year-old, originally from Whitchurch, England, credits the flexibility of Saint Leo’s low-residency creative writing program to making his educational goals possible. Finch, who enjoys a career as a teacher, lives in St. Petersburg, FL with his partner, Ann Marie, 3-year-old son, Wallace, and a rescue dog.

Finch began his higher education career at the University of Tampa (FL) where he majored in English and writing. It was a former professor who convinced him to enroll with Saint Leo University.

“I had Dr. Steve Kistulentz there (UT) and volunteered in the residency program,” Finch said.

While he was accepted into a few full-residency creative writing graduate programs and even started in one of them, he just didn’t feel comfortable.

Kistulentz became director of Saint Leo’s new low-residency Master of Arts in creative writing program in 2016. “I was following Dr. Kistulentz on Facebook and knew about Saint Leo starting its new graduate degree program,” Finch said. “He encouraged me to apply.”

“With the full-residency programs, you pretty much can’t work anywhere else and have to be totally committed and invested in them,” Finch said. “I also wanted to start a family, and it just wouldn’t have been practical for me to be tied down with a program like that.”

The Online Format of this Creative Writing Degree Program

At first, Finch had some trepidation about enrolling in a low-residency degree program in which the coursework is primarily conducted online.

“Before starting this program, I had never taken an online course in my life,” Finch said. “I admit I was a little hesitant because I’m not the most tech-savvy person, and the idea of an online degree program was fairly intimidating to me.”

But thanks to the availability of his professors and the summer residency aspect which enabled him to meet his instructors and classmates in person at University Campus, his concerns were quickly alleviated.

“I’d say I actually felt closer to my professors in this program than I did in traditional classroom-based programs I’ve been in,” Finch said.

Each summer, students in this program gather at University Campus for one week. During this event, several accomplished authors are on hand to read from their works and offer advice to students on their respective writing projects.

“Some of the most exciting aspects of this program included listening to these writers read from their work and the craft workshops they do,” Finch said. Hearing their stories about their life experiences as writers has been invaluable.”

Getting to meet Pulitzer Prize-winning author Adam Johnson was a true thrill for Finch. “I actually shared a cheeseburger with him, which was a very interesting and unexpected experience,” Finch said. “I had led a book club on one of his books when I used to work at a bookstore.”

Connecting with his fellow students was also a big perk.

“It’s surprising how well you get to know the other students in just a week during the residency and through our online discussions,” Finch said. “You really learn so much from your classmates.”

Students must complete a book thesis project in their coursework. For Finch, he started out with a short story that he has expanded into a much longer project. The story is about two brothers in which one is left to care for the other brother’s child and the drama that ensues from this situation. It is loosely based on his personal experiences.

Finch currently teaches ninth grade English and print and digital media at Jesuit High School in Tampa, FL. And when not in the classroom, his other job is his writing career. Already, Finch has had about 30 of his works—short stories and poetry—published in small literary and online journals.

Some of these print publications have included Avis Mag, Flash: The International Short-Short Story Magazine, The Level Crossing, and Haiku Journal.

Finch said there are three primary ways in which he comes up with the ideas for his creative writing.

“When something happens that intrigues or confuses me and I don’t have words for it, I immediately want to write about it and find the language to express it,” Finch said. “Also, any time someone tells me a story and I retell it and people take the time to sit down and listen, then I want to share it with more people in writing. Finally, I like thinking about memories I have from my own life and preserving them in writing.”

Despite his achievements as a young writer, he knows he can always get better at his craft.

“I want to keep getting better at it,” Finch said. “With creative writing, I want to craft better sentences, more nuanced characters, and find the best ways to perfect memories I already have in my mind.”

He has some advice for anyone who wants to grow as a writer:

“No matter what stage you’re at, don’t be afraid to take risks,” Finch said. “Don’t be afraid to write a story that is solely yours because people out there just might be interested in reading it. When you start writing stories with a specific audience in mind, it can hold you back from expressing yourself as far as who you are as an individual. Also, don’t be dissuaded by criticism because it’s only going to make you a better writer in the end.”

Read one of Nicholas Finch’s works entitled, “What They Give Children” and learn more about the Master of Arts degree in creative writing.