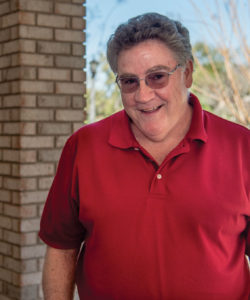 Writing and communication have figured into many aspects of Frank Cumberland’s life. Cumberland ’80 studied at Saint Leo’s Langley Air Force Base Education Office and earned his bachelor’s degree in human resources management and sociology while he was serving in the Air Force. He retired as a colonel after 24 years.

“The Saint Leo people were so helpful,” he said of his first visit to the education office. “I was amazed at how quickly I could get started and the variety of offerings.”

He also appreciated Saint Leo’s emphasis on writing. His family—especially his mother—nurtured his love of literature, and that continued in his education at the university and throughout his career.

Cumberland served in the Air Force Medical Service Corps, and also worked as a health professions recruiter for Air Force Recruiting Service. “My team recruited physicians, dentists, health administrators, and allied health professionals,” he said. “Recruiting was a true challenge, and I learned a lot from the experience.”

In 1998, the Department of Defense established the TRICARE Management Activity to manage its health program for 10 million beneficiaries worldwide. A director of communications was needed to tell the TRICARE story, and Cumberland was chosen for the job.

He retired in 2017 as senior vice president for Communications, Marketing, and Business Development for Axiom. In that role, he led the firm’s proposal-writing team for 15 years.

Besides writing, another passion of Cumberland’s is baseball. The self-proclaimed “Mayor of Nats Town,” Cumberland was a strong supporter of the effort to bring baseball back to Washington, DC. He penned many columns, letters to the editor, and other materials advocating for baseball’s return to his hometown. The effort bore fruit when the Washington Nationals played their first home game in Washington in April 2005. 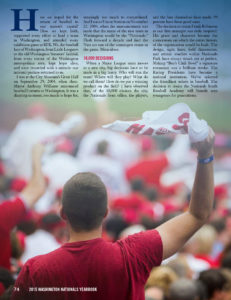 Cumberland was a contributor to the Nationals’ yearbook in 2015. In “Hope Comes Home: A Decade of Baseball in Washington” he writes, “It is a special thing to see your dreams come true, and to see your fondest hopes turn into reality. To me, the ﬁrst decade of the Nationals has been like an unfolding miracle—for the morale of our hometown, the winning ways of our team and the everyday spirit of Nats Nation.”

He is a member of the President’s Council at Saint Leo, and a member of the Board of Governors of the National Military Family Association. He is married to Lori, father to Emily, Luke, and Tom, father-in-law to Dustin, and grandfather to Logan. He continues to write freelance stories and articles and is working on a book on the lessons of Henry David Thoreau’s Walden. Cumberland notes that he really should be a writer, as he is named after St. Francis de Sales, the “patron saint of teachers and authors.”