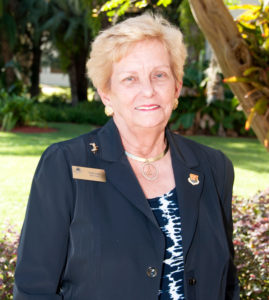 From serving as the CEO of her family business to leading philanthropic efforts, Trustee Emerita Virginia “Ginger” Judge attributes much of her success to taking bold action and saying “yes” in times when others have said “no.”

Saint Leo has an important place in Ginger’s heart because of her familial connection to the university. Her son, Timothy ’77; daughter-in-law, Kathleen ’79; and grandson, Christopher ’15 are all graduates of Saint Leo.

Ginger and her late husband, Dan, provided a combined 20 years of distinguished leadership as members of Saint Leo’s Board of Trustees.

Before serving as a trustee, Ginger demonstrated her ability to lead at the family-owned and -operated Honeycomb Company of America, where she was the go-to person for many projects.

Honeycomb specialized in the manufacturing of replacement aircraft parts for the U.S. Air Force. The business relocated from Bridgeport, CT, to Sarasota, FL, in 1964. Ginger was actively involved in the company, serving as office manager, purchasing agent, contracts administrator, and senior vice president. Having earned the respect and trust of the employees, she took over as Honeycomb’s president and CEO after Daniel’s passing in 2005.

When asked about how she came into a leadership role in the company early on, Ginger said, “I offered to help.” Those four simple words embody Ginger’s ethos, demonstrating her willingness to offer her time, talent, and treasure in service of others.

Ginger also demonstrated the Saint Leo value of integrity throughout her career. Her commitment to delivering quality products remained steadfast throughout her 49 years of business ownership.

“If it wasn’t right, it wouldn’t go,” Ginger said, emphasizing the importance of doing what was right for servicemembers, whose lives depended on the structural integrity of the parts.

Ginger recalled a time where she packed an airplane part in the trunk of a Lincoln and drove to Warner Robins Air Force Base in Georgia. She knew that if she did not get it there, the plane could not get off the ground. Ginger understood how important those hours were to the servicemembers, so she did what she knew had to be done.

While she has many fond memories of the people she worked with, there were many challenges that came with working as a government contractor for the U.S. Air Force.

While Ginger retired and sold her business in 2014, her words on leading in business through good times and bad are still relevant to many challenges we face today.

As COVID-19 continues to have an unprecedented impact on public health and on the financial situations of so many across the globe, Ginger has continued to step up and act.

When the Lions Together Fund was established to support the needs of both students and staff who faced serious financial hardship due to the effects of the pandemic, Ginger was one of the selfless individuals who made a generous investment to the fund. This was not out of character for her, as she has dedicated much of her time, talent, and treasure to giving back to those most disadvantaged.

Part of what makes Ginger such a distinctive charitable donor is her unassuming disposition.

“It doesn’t have to be a lot of money,” Ginger stated, as she discussed the importance of encouraging others to do what they can to support the university’s mission.

To inspire generosity from others within the Saint Leo community, Ginger raised a matching gift challenge during A Day for Saint Leo. Her advocacy was a significant factor in the success of this record-breaking day, during which the university raised more than $160,000 from 600 individual donors.

Ginger’s sentiment on giving speaks to the tremendous satisfaction she and other donors like her derive from establishing a legacy of charitable support by making a gift to an organization close to their hearts.

Recognizing the importance of supporting students not just today, but tomorrow, Ginger has made a commitment to join the James J. Horgan Heritage Society. The society honors alumni, parents, and friends who have provided a visionary gift for tomorrow’s generation by including Saint Leo University in their estate plans.

Ginger understands that for many students, a college degree opens doors to opportunities in life that may have seemed beyond reach.

“It gives the youth a shot at doing well,” Ginger answered when asked about what motivated her to make a legacy gift. “They’ve got to have a shot.”

Our community is grateful for trailblazers like Ginger, who demonstrate their belief in what matters most: faith, family, and community. If you would like to join Ginger in becoming a member of the James J. Horgan Heritage Society, please contact Associate Vice President of Advancement Stephen Kubasek at (352) 588-8355 or stephen.kubasek@saintleo.edu.