The Secret Strength of Catholic Sisters 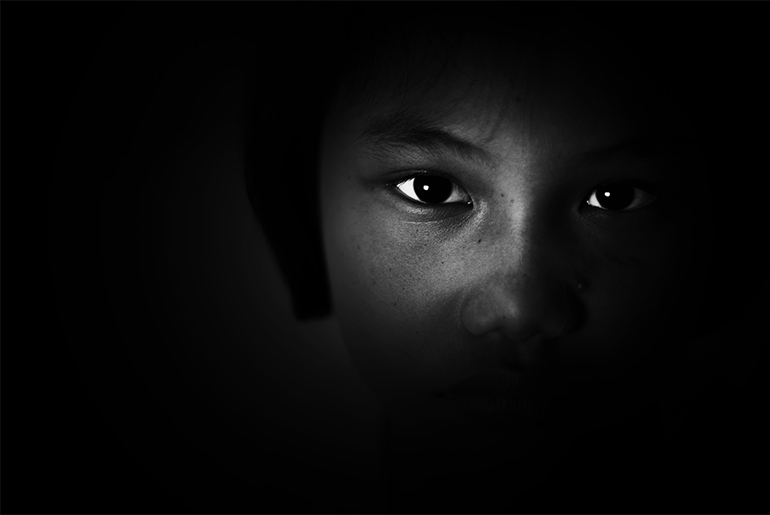 In the global battle against human trafficking, there is an unlikely seeming superhero. She does not wear a badge or carry a gun. Nor does she hold a position as a government leader. Instead, this superhero works for a greater authority. She is a sister of the Catholic Church.

Human trafficking, a crime that involves the use of force, fraud, or coercion to lure victims into labor or commercial sex acts, has claimed more than 24.9 million victims around the world, according to the U.S. Department of State. There are different types of trafficking, ranging from forced labor and marriages, to debt bondage and sexual exploitation. In some of the most horrifying cases, traffickers have targeted children, turning them into soldiers to fight in war, or they have used their victims for organ harvesting.

Catholic sisters who work in some of the poorest communities across the world often find this crime in their midst. They meet trafficking victims who need help re-entering society, or they work in positions where they can help influence the narrative about trafficking in the community.

Because of the influential role that Catholic sisters possess, nonprofit organizations and foundations are collaborating with them. The Conrad N. Hilton Foundation is one such organization. It was created in 1944 by international business pioneer Conrad N. Hilton, who founded Hilton Hotels and left his fortune to help individuals throughout the world living in poverty and experiencing disadvantage.

Today, the foundation partners with TalithaKum, a global network of sisters focused on eradicating human trafficking.

“Their interconnectedness around the world provides the ideal circumstances for strong networks to help combat human trafficking,” said Sister Jane Wakahiu, associate vice president of program operations and the head of the Catholic Sisters Initiative with the Hilton Foundation. “They provide a safe and loving space for survivors of human trafficking, a healing presence, and skills-building for reintegration in communities.”

To help aid their cause, the foundation awarded Saint Leo University a grant valued at $420,000 in 2017 to provide sisters with training focused on addressing human trafficking.

“As a Catholic university, we were incredibly honored to receive this grant in support of such a critical cause,” said Mary Spoto, vice president of Academic Affairs at Saint Leo University. “With our experience in online learning and faculty expertise in social work, criminal justice, and management, we have been able to develop a unique program that is proving to be truly useful to Catholic sisters across the globe.”

Thanks to the grant, Saint Leo University has now educated 80 sisters through the online certificate program in human trafficking. The last cohort will convene this fall.

The online program is comprised of two courses: project management and human trafficking. Faculty in criminal justice, management, and social work all contributed to its development, and the university’s learning and design team put the material into an online format.

Keeping the sisters in mind, the course employs parables, a method of teaching used in African culture and the Bible. The sisters are introduced to stories about victims of human trafficking and are asked to think critically about how to help them. The course even uses familiar Bible stories to illustrate information.

The course also is incredibly practical. For homework, the sisters are tasked with assembling a training manual that, once complete, can be used by themselves and others to help victims of human trafficking.

The sisters also have the opportunity to network and exchange information and resources with one another. Course instructors created a group through WhatsApp so the sisters can continue to stay in touch and network. The program has become more than just training. It has become a network for good.

With Saint Leo University’s history of excellence in online learning, the sisters engage in the course from where they live and work. A majority of the sisters live in Nigeria and Kenya, but the course has also served sisters living in Rwanda, South Africa, Tanzania, Uganda, Zimbabwe, Algeria, Burkina Faso, Ghana, Italy, and Mauritania.

The sisters are college-educated women who hold jobs, often relating to their degrees. Their educational backgrounds range from law and business to psychology, education, and medicine. By occupation, many of the sisters work as teachers, social workers, counselors, or missionaries. Some also work in a business setting or for non-governmental organizations. 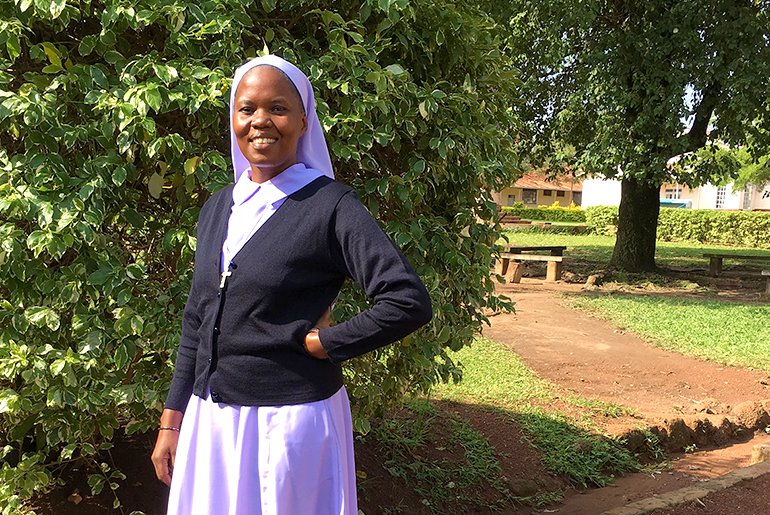 Sister Hedwig Muse belongs to the institute of The Little Sisters of Mary Immaculate, founded by Comboni missionaries in Northern Uganda in 1936. By profession, she is a lawyer and teacher, which has led her to do work in peace and justice issues at the national level in Uganda, as well as through the Association of Religious in Uganda (ARU).

Through her work with ARU, Muse has guided others working in the peace and justice forum to be equipped with skills and knowledge through anti-trafficking campaigns. She also served on a committee tasked with reviewing employment laws in Uganda, allowing the government to criminalize trafficking and establish punitive measures.

Muse was part of the first cohort of students in the online certificate program.

“With the knowledge l acquired, l was able to form a group at the village level to sensitize the community,” Muse said. She invited leaders from all religious denominations to spread the message as widely as possible. “They were so delighted that l was doing a course on a crucial issue that they were battling with at the time.” 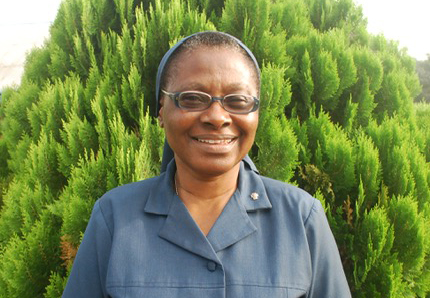 As a member of the Daughters of Charity of St. Vincent de Paul community, Sister Gloria Aniebonam serves people living in poverty both physically and spiritually. At the time she was enrolled in the course, Aniebonam served as the provincial leader of the order’s Province of Nigeria, a position that involved working with sisters in Burkina Faso and Ghana to ensure the vitality of their services and faithfulness to their charism. (The order’s province takes in the three West African countries: Nigeria, Burkina Faso, and Ghana.) A central part of her role also included engaging members and collaborators of the congregation in professional and spiritual formation.

“The course was of huge help to me and my congregation, especially for serving persons who have experienced any form of poverty either by being trafficked or other forms of slavery that have emerged and seem to be ever-emerging,” Aniebonam said.

Since 2015, her congregation, in collaboration with the Conference of Women Religious of Nigeria, has been coordinating the service for people who are trafficked, she said. The congregation works with children and youth, most of whom experienced child labor and other forms of slavery in Nigeria, Ghana, Burkina Faso, and other countries across the world.

“The course helped me particularly in becoming aware of the subtle forms of slavery or trafficking, which are often within our vicinity,” Aniebonam said. “Yet one can be oblivious or inattentive due to ignorance.” 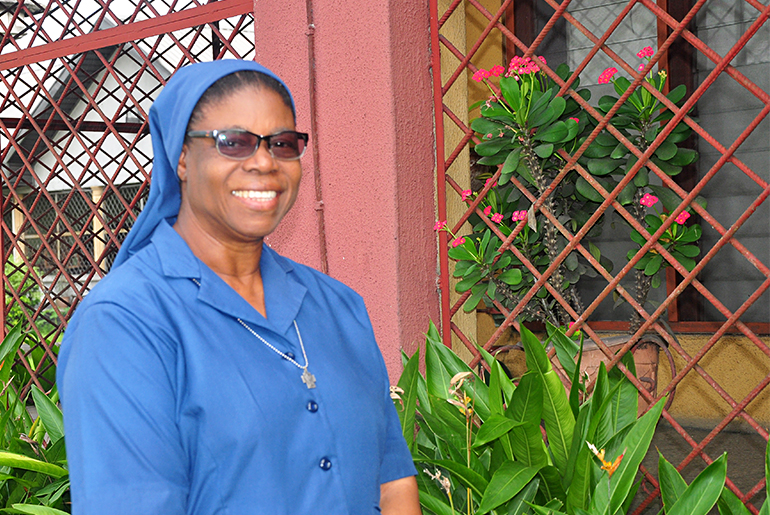 Working in the Province of Nigeria as a Daughter of Charity of St. Vincent de Paul, Sister Philomena Okwu has served in a variety of capacities on several missions. Through her missionary work in Kumasi, Ghana, she worked with the street children in the community, and on efforts to generate awareness about human trafficking.

In 2007, she returned to Nigeria and assumed a new role managing a girls’ high school, a position she held until 2013. During this time, Okwu was appointed project coordinator of the Daughters of Charity services in Nigeria, Ghana, and Burkina Faso. While serving in these roles, she found herself on the front lines of human trafficking, working with street children in Port Harcourt, Nigeria.

Because of her work, Okwu had already participated in workshops on human trafficking, before enrolling in the online human trafficking course at Saint Leo. Still, she found the course helpful in reinvigorating her work.

“The course helps one to understand human trafficking and what it is all about, the types of human trafficking, causes—the push and pull factors, the agents, the magnitude of the problem and its devastating consequences, not only on the victims but also on their families and the larger society,” Okwu said. “It also exposes the unrelenting tricks and tactics of the traffickers to trap their preys.”

In January 2020, Okwu was appointed to a committee with a special focus on Benin City, a Nigerian city known as an origin point of most trafficking. It also has the highest population of returnees.

This unique role has increased the amount of work Okwu is performing to help victims of human trafficking. Her organization provides temporary shelter, counseling, medical care, food, pastoral care, social rehabilitation, and much more for victims. The organization is so crucial, that Okwu recalls helping two trafficking victims her first day on the job.  Both were mentally ill.

“I was confronted face to face with the evil and aftermath of human trafficking,” Okwu said. “These human beings have been destroyed for life by fellow human beings and never to rise again. I felt like Pope Francis, who said, ‘this cannot continue,’ but the task is enormous. It calls for a concerted effort and collaboration of stakeholders and governments.”