Leading the Way in Criminal Justice

Encouraging and educating the next generation of law enforcement leaders is just part of what drives Saint Leo University alumna Cerelyn “C.J.” Davis, ’98. As the chief of the Durham (NC) Police Department and president of the National Organization of Black Law Enforcement Executives, Davis not only serves her community but also strives to improve her chosen profession. She advocates for change and standardization in training and the implementation of best practices for all law enforcement officers, nationwide.

Davis graduated with honors, earning a Bachelor of Arts degree in criminology from Saint Leo, studying at Fort McPherson in Atlanta. She earned a master’s degree in public administration from Central Michigan University and hopes to earn a doctoral degree.

She began studying at Georgia Military College to earn an associate degree and then transferred her credits to Saint Leo. “I was very familiar with Fort McPherson as my father was a career Army soldier,” she said. “When he retired and came back to Atlanta, we stayed close to the military environment.”

A co-worker at the Atlanta Police Department spoke highly of Saint Leo University. “He started talking about his instructor, Dr. Art King, and said what a great curriculum the university offered,” Davis said. “I thought it was a good fit. And there were evening classes that fit into my schedule. I looked at the curriculum, and it fit with my career aspirations.”

Like many of Saint Leo’s criminal justice students who are employed at law enforcement agencies, Davis said, “There literally were days when I sat in my patrol car writing my papers in between calls.

“Saint Leo was just an awesome experience for me,” she said. “[Earning my degree is] probably one of the proudest moments in my life. I appreciated that journey because it was so tied to my work. To graduate and to graduate with honors, to know that the sky is the limit. I could do it. I could juggle the school work and still excel in the job.” 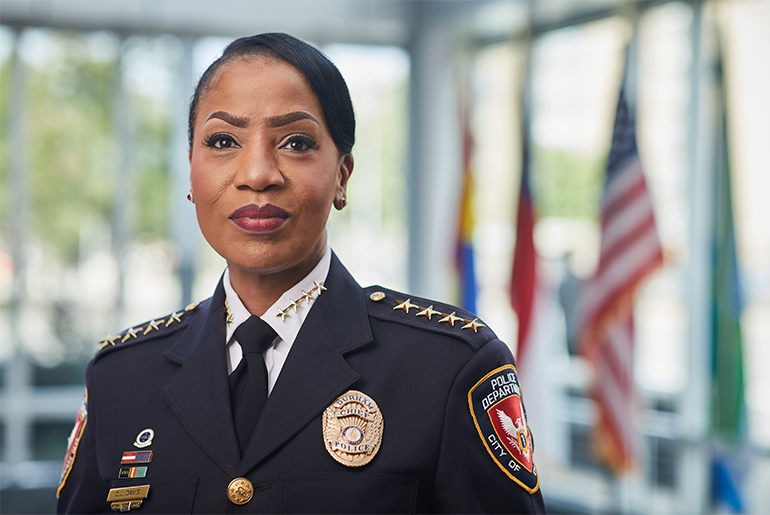 Davis has served in law enforcement for 34 years, beginning in 1986 as an officer with the Atlanta Police Department. At the time she started, the Atlanta agency was making an effort to diversify its police force, especially recruiting more women. Although there were 11 women in her recruit class of 35, only two graduated.

She and other female officers encountered resistance to them being police officers, but “it’s been getting better over the years,” Davis said. “There are more women in charge. And there are some male leaders who are forward-thinking and appreciate the contributions women make. It can be better. With 18,000 police agencies around the country, think of how many women are leading [those agencies]. We could absolutely do better in that regard.”

Davis said her Saint Leo degree prepared her for leadership roles. “I think it broadened my perspective,” she said. “Even though I was very familiar with law enforcement, it expanded my thoughts on social problems, history of the law enforcement, community policing, and all of those important elements that are key to be successful—to really understand the criminal justice system. I learned what is expected of law enforcement agencies. It’s not just responding to calls.”

As she progressed through the ranks with the Atlanta Police Department, she developed strengths and skills in crime analysis and reduction; strategic planning; community engagement; special operations; homeland security; project oversight; capital improvements; and many more aspects of law enforcement.

In 2008, Davis was selected by Oprah Winfrey’s O Magazine, as one of 80 women for the O White House Leadership Project, Women Rule! The group, dubbed “Tomorrow’s Leaders,” benefited from meeting with some of the country’s trailblazers, which helped prepare Davis for her future.

Her responsibilities as chief of the Durham Police Department, are varied. She became chief in 2016, and oversees a department of more than 600 employees and a $90 million yearly budget, while serving a population of 280,000. “A lot of the responsibility is more how we function as a unit and work well with the community,” the chief said. “Community engagement is critically important. Helping our officers know the community is our customers. Building relationships is imperative. I cannot think of a time that we need that more than now.”

Davis became a member of the National Organization of Black Law Enforcement Executives (NOBLE) as a sergeant in Atlanta. While the organization is geared toward law enforcement executives and police chiefs, associate members who hope to be mentored also are accepted. Davis joined NOBLE because she wanted a mentor. “I wanted to know the ins and outs of leadership,” she said. “We [NOBLE] also do a lot of work in the community, a lot of education, and awareness training, especially in communities of color so young people have a good understanding of the police. And we want them to have safe encounters with the police. We discuss ‘what do you do if you’re pulled over?’ NOBLE also helps officers as well, managing the situation so that it is a safe encounter. It’s sort of a twofold approach. The end goal being mutual respect and making sure everyone goes home safe.”

NOBLE started in 1976 because of racial inequities that prohibited African-American law enforcement from moving up in the ranks, Davis said. “It was created to help to develop minority police officers into executives,” she said. “Since then, we’re very involved, trying to achieve equity in communities, equity in the way we operate. It isn’t a Black-only organization. It is for those who share similar values and goals.”

Now serving as president of NOBLE, Davis has been in the spotlight in 2020. She appeared on “Good Morning America” on ABC on June 3, and called for “sweeping changes and police reform” as she reacted to the nationwide protests taking place over the killing of George Floyd by Minneapolis police officers.

But even more importantly, she testified before the U.S. Senate Committee for the Judiciary on June 16, about Police Use of Force and Community Relations. “I was invited to testify, and I discussed the 10 key areas that we feel as an organization must be addressed in order for police agencies to be more standardized, more accountable, and so they don’t keep officers who keep committing egregious acts.”

In her testimony, Davis said, “We wholeheartedly support the passing of the ‘Justice in Policing Act,’ which specifically addresses the loopholes that continue to allow policing tragedies free of oversight and accountability, environments that foster unfettered racial tension, and the continued desecration of what I’ve always thought to be a NOBLE profession. Lastly, on behalf of more than 3,800 law enforcement leaders, mostly minority who represent the membership of NOBLE, I thank you for supporting the law enforcement profession, but more importantly, for listening to the voices of protesters around the globe who demand change … they too deserve action.”

Davis said she is proud to serve as president of the national organization. “It’s an honor to be able to speak on behalf of the 18,000 police organizations, especially at times like this,” she said. “We come from the community, we understand the communities—not that my other colleagues do not—but we advocate for change, to listen to the community.”

The COVID-19 pandemic has challenged her, Davis said. “But I’m still carrying out my goals and strategic plans,” she said. “I’ve done four interviews in one day.”

She considers communication as being key. “I encourage up-and-coming leaders to take advantage of public speaking, become certified as an instructor, take classes,” she said. “If you can’t communicate it, you can’t share it, or articulate it in a meaningful way. “It’s important to work on ourselves holistically.”

Saint Leo’s criminal justice program primed Davis for her current positions. “That’s what prepared me for leadership,” she said. “You can be a great police officer and know the fundamentals, but until you expand your perspective and learn what is expected and engage the community, you won’t succeed as a leader. You have to look at law enforcement from an aerial view.”

Her degree helped her learn about recruitment, retention, and other administrative support roles that leaders must fill. “You’re dealing with a lot of various personalities,” she said. “You’re trying to find cohesion—to bring everyone together from different places and perspectives. Look at it from a holistic standpoint, so you get buy-in for the philosophy of the department.”

Davis strives to lift up and mentor others. “I’m constantly trying to ensure people have opportunities to take on leadership roles,” she said. “I’m preparing an environment for that, including college and advanced training. I’m always telling people, ‘You can go back to school. I did it! I had a daughter, and I worked at the same time!’”

She and her husband, Terry, are parents to one daughter and grandparents of two, who live in New York. Most of her family live in Atlanta while the couple is based in Durham. Terry Davis also is a Saint Leo alumnus, having earned his associate degree from Saint Leo in 1997.

Looking toward the future, at 60, Davis said she is “sort of at the sunset of my career. I believe I still I have a lot to offer this industry. It may not be in the position as a chief; it could be in some other role. There is the saying, ‘To much is given, much is required,’ I still believe there is more for me to give.”

View the testimony of Cerelyn “C.J.” Davis, chief of the Durham Police Department and president of National Organization of Black Law Enforcement Executives, to the U.S. Senate Judiciary Committee.

Mary McCoy is the senior editor and media relations manager for Saint Leo University in the Office of Brand Marketing and Communications and has worked at Saint Leo since October 2014. She earned her bachelor’s degree in journalism from Bowling Green State University (OH).

Keeping a Promise: From the Court to the Corner Office