Yet that is only one dimension of his work life on this coastal outcropping.

Shelden tends spiritually to the population laboring nearby at Port Canaveral (pictured below). They are people who work for luxury cruise ships, on maritime cargo vessels, in port operations, and sometimes for the U.S. Coast Guard at this deep-water berth. Their jobs are essential, not glitzy. Their means are few. They can be isolated from families, from houses of worship, and may be oceans away from their homelands. To these souls, Shelden (MA ’15, theology) is Deacon Bill. 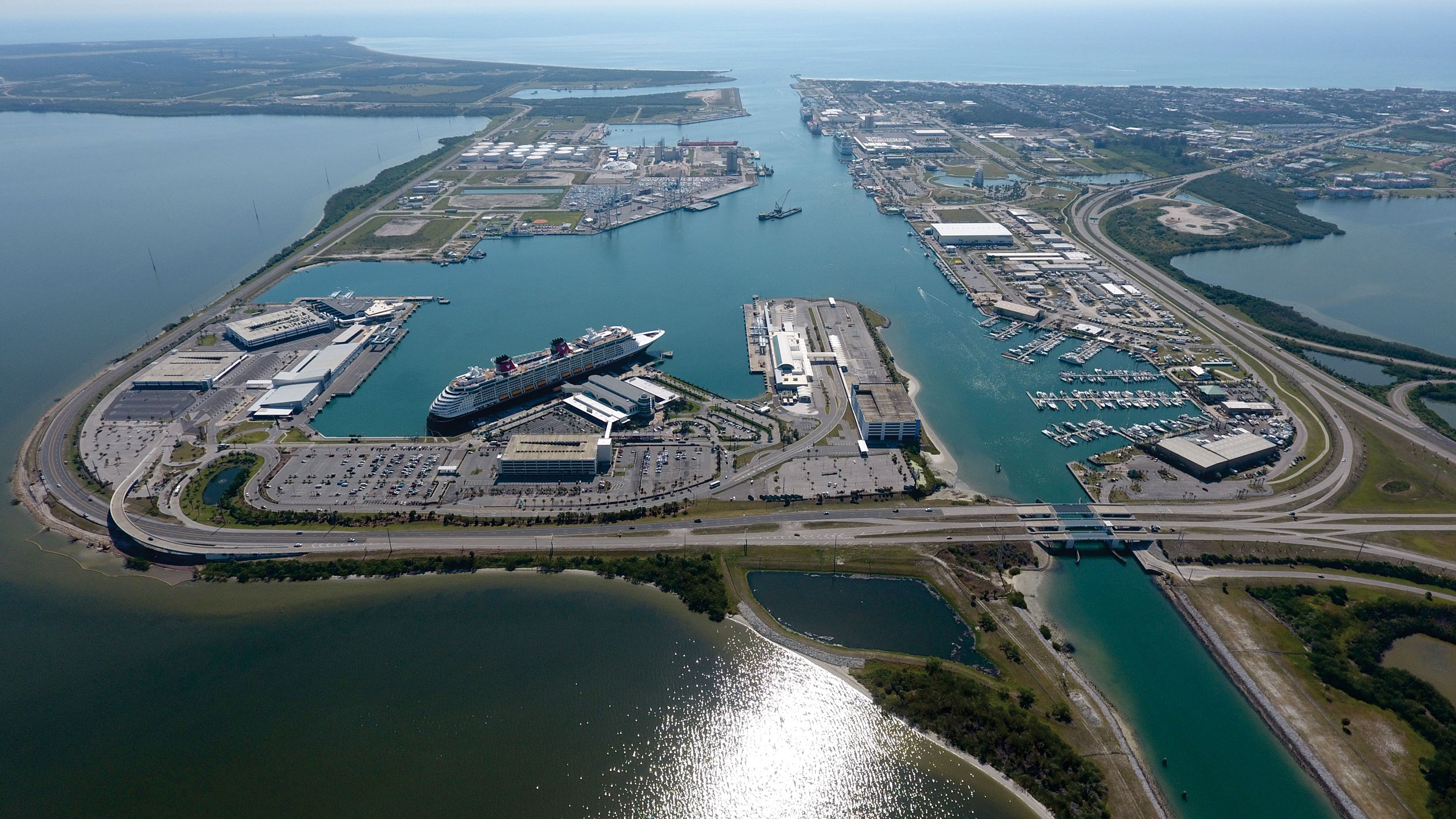 He is part of the team at Space Coast Seafarers Ministry, a non-denominational Christian ministry that provides spiritual nourishment and many practical resources to an underserved population. Often, Deacon Shelden leads people in prayer either in groups or individually; he generally reads some Scripture and then provides reflection.

The encounters can be much more informal, just him and a person from the port. “The one-on-one interaction can be powerful as well. We pray together, talk, shoot a game of pool, I even help them fill out job applications or prepare for interviews,” he says.

If circumstances permit, Shelden would like soon to begin offering specifically Catholic services through his role with a professional Catholic association called Apostleship of the Sea. (Catholic Charities of Central Florida is helping this effort by seeking space at the port where Catholic services could take place.)  As an ordained permanent deacon, Shelden can fulfill many functions important to Catholics. A permanent deacon may assist a priest during Mass (a priest is required to preside), conduct baptisms, be a witness to marriages, and lead wakes or funeral services so long as Masses are not involved.

Often, though, a lay public that is not accustomed to spending time with deacons can get caught up in formal particulars of the office and miss an essential aspect of this calling. And that is the way deacons can serve the Church by offering a compassionate presence in the secular world, beyond the confines and routines of their own parishes and neighborhoods.

As Shelden explains about his work at the port, “It is a chance to meet and interact with people who don’t have a spiritual home. My heart goes out to these people who work on ships. They don’t have a family, some of them.”

He is touched also by the young people he meets serving in the Coast Guard and carrying weighty responsibilities. “A lot of them are between 18 and 25,” says Shelden, who is 55. “They go out on law enforcement actions and they see things that would scare an older person.”

Shelden is quick to point out that he is not a certified counselor. His identity as defined by the Church is that of a faithful, caring servant, and he brings an appropriate demeanor to the mission. “I just try to be as authentic as I can. My wife [Wendy] says people gravitate toward me because I am natural and accepting.”

No doubt, those qualities would help make a faithful Catholic man a possible candidate for the diaconate, as the Catholic religious order of deacons is sometimes called.

There is much more required, though, to become a permanent Catholic deacon, and depending on the diocese, the process can take five or six years. (Men who are on the road to priesthood in the Catholic Church are ordained as transitional deacons.) Ordaining married men as permanent deacons is widely accepted, and the couples are generally expected to enter the formation process together. This involves years of spiritual discernment and reflection for the couples, with each member praying and thinking deeply about their own and their family’s relationship with God.

A deacon candidate must develop pastoral skills during the period, too.

For instance, Shelden served in the prison ministry at his county jail for a year. Inmates awaiting trial or serving sentences of one year or less could request individual pastoral services (as well as attend service or Bible study). Shelden still recalls visiting inmates and listening to their stories, and inviting them into prayer about their situations. “What they have been through is so disheartening,” Shelden says. “These are people who have a lot of problems but don’t have any avenue for getting things fixed.”

The training of deacons further includes an academic element so that they have the theological grounding they will need in their service. It is up to each diocese to determine how this will be done. Saint Leo University offers the Master of Arts in theology program to several dioceses in Florida and in some other states for this purpose. (While the MA is typically offered online, dioceses that enroll their deacon-candidate groups with Saint Leo are provided with classes taught at their sites by a faculty member.)

Candidates must complete the 36-credit-hour graduate program before they can be ordained. So far, 250 men in diaconal formation have completed the MA, and 140 more are enrolled.

As rigorous as that is, upon ordination into the clergy, permanent deacons may find life opening up to even more new and unexpected ways to walk in the spirit of Christ. Catholic permanent deacons are expected to be deacons all the time, so, at his paying job at Cape Canaveral Air Force Station, Shelden is expected to carry out his duties and work with colleagues in a manner reflective of his relationship with God. At his parish, he and fellow deacons sometimes fulfill other specific tasks at the request of the parish priest, such as delivering the homily (sermon) during Mass, or assisting with added Masses for holidays.

Life unfolds. Deacons are asked to help, or find themselves equipped and in positions to help. “That’s part of the excitement of living a life in service to Christ.”