Britt Sederholm ’18: On the Approach

How did an Ogden, UT, native end up on the Saint Leo Lions volleyball team? “It’s a long story,” Britt Sederholm explains. 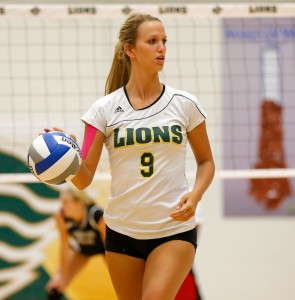 While in high school, the young volleyball player knew she wanted to compete on the collegiate level, was set on Division II, and was focused on a college in New Jersey. However, while competing in a tournament in Colorado, she caught the eye of Coach Sam Cibrone, who was there with his Tampa United volleyball club. One thing led to another, and she decided to pay Saint Leo a visit. She toured the campus, met the team, and instantly knew that the Lions were the team for her. Another important moment from that tournament? She spiked the ball on one play, hitting Maddy Powell—from the opposing team—right in the face. But no hard feelings—the two players are now roommates at Saint Leo.

Britt admits that moving to Florida was a hard transition at first, but her family has been very supportive. Her parents, who adopted her at birth, keep in touch—in fact every day her father texts her and her mother Snapchats. She explains that her parents were very eager to adopt her, as well as her older sister, Shay. “Shay is part Mexican, and the adoption agency was worried that my parents would have a problem with that. They said, ‘We don’t care if she comes out with antennas!’ ” Britt, at five-foot-eleven, jokes that she and her sister look nothing alike: “She is short and brown, but even though I look down on her in height, I look up to her in life.” And Britt claims that her niece, Kylah, is perfect. “She is my favorite person in the world—a little ball of happiness.”

Before Britt was born, her birth mother had one instruction: she did not want the baby growing up in a Church of Jesus Christ of Latter-Day Saints (LDS) home, which is a tall order in Utah. Jeff and Tamra Sederholm had no problem with that requirement and raised their daughters to be open to all religions. Britt attended a Lutheran school through eighth grade and then a Catholic high school. She explained that at public schools in Utah, almost everyone is LDS and “you can almost feel like an outcast if you’re not.” That was another benefit that Britt sees at Saint Leo, a Catholic institution that welcomes people of all backgrounds and faiths.

What does the future hold for this talented outside hitter? She is majoring in business marketing and would like to work for a professional sports team, following in the footsteps of her best friend and godsister, Julie Johnson.

For now, when she is not studying or playing volleyball, she serves as an assistant coach for Tampa United. “Britt is a great person with awesome energy and devotion to our sport,” commented Coach Cibrone. “She coaches to learn about the game and always gives 100 percent on the court. She is a huge asset to our team.”