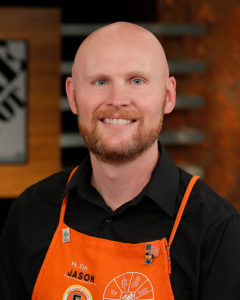 Alumnus Jason Arigoni became a leader for The Home Depot by investing in others.

After high school, Jason Arigoni ’05 was not considering college. He already had established himself firmly in a retail career, working since he was a teenager at the Southeastern grocery chain Winn-Dixie and then joining Target after graduation.

It wasn’t until 2001, when Arigoni played a round of golf at Lake Jovita Golf and Country Club and had a casual conversation with another golfer, that he seriously thought about a degree. That golfer turned out to be a Saint Leo admissions counselor. Arigoni started classes in January 2002 and graduated in May 2005 with a bachelor’s degree in business administration.

Working full time while commuting and taking a full course load at University Campus left Arigoni with little time for campus social life. “My time was spent in class or at work,” Arigoni said. “I was working 40 to 55 hours each week, but I did occasionally come out to support sporting events.”

Yet, Arigoni’s Saint Leo experience made an impression.

It is, perhaps, no coincidence that Arigoni is now regional vice president of the New England region at The Home Depot, a company that espouses core values similar to Saint Leo University’s.

“In all honesty, I think all of Saint Leo’s values align with Home Depot’s,” Arigoni said. “The Home Depot is a values-driven organization. We encourage entrepreneurial spirit, doing the right thing, building strong relationships, giving back, respect for all people, creating shareholder value, excellent customer service, and taking care of our people.”

Taking care of people, especially his customers and his employees, may well be what Arigoni does best.

He made time to speak with Saint Leo while waiting to board a plane on a Friday afternoon. Arigoni’s emphasis on communication skills was evident as he tuned out the airport noise and answered every question thoughtfully—even as he was headed home to (the Boston suburb) where he, his wife, Lina, and their 4-year-old daughter, Gulianna, now live.

“I was really attracted to the values and the culture of The Home Depot, that feeling of ‘We’re going to do this! We believe it! We live by it!’” Arigoni said.

“I didn’t realize how rare it was to be recruited by The Home Depot,” Arigoni said. “I really enjoyed working for Target, so when The Home Depot tried to recruit me, I went back and forth with them for a year and a half.” Once Arigoni made the decision to join the world’s largest home improvement retailer, he never looked back.

Arigoni is a proponent of the “inverted pyramid” model of organization and leadership used at The Home Depot. In that business model, front-line associates (employees) are the most important people in the company’s hierarchy because they are closest to the customers.

He said he believes in investing in his associates and attributes his success to that investment.

“The moments that stick with me the most are the ones where you inspire associates who didn’t think they were capable of growing their career, for whatever reason, and you show up and help them break past that notion,” Arigoni said.

“Many of these folks go on to obtain roles that are actually life-changing,” Arigoni said. “The most motivating part is realizing in real time that you are part of one of these career/life-changing moments.”

As focused as he is on his job, Arigoni makes time for other important facets of life.  He and his wife and daughter are working their way through a list of the 100 best things to do in the Northeast. They especially enjoy exploring the Atlantic coastline and hiking.

Through his position at Home Depot, Arigoni is the “community captain” supporting the service work of the 800 stores in the northern United States. Outside his job, he serves on the executive advisory board for the Ron Burton Training Village, which offers a seven-year program for at-risk youth to guide, support, and mentor them in education, social skills, moral values, leadership, and fitness.

He also makes time for entrepreneurial side gigs, running among other businesses, a property management company.

Arigoni offers this advice to his team and to anyone who aspires to grow their careers: “Understand your personal balance and how that aligns with your personal vision and values. Make time for what motivates you outside of work.

“Remember that you’re in marathon, not a sprint,” Arigoni continued. “Whether you are making a lateral move to get ahead in your career or working toward a college degree that takes a long time to finish, it’s all OK, as long as you meet your end goal and help others along the way.”

Photos courtesy of The Home Depot

Deacon Charles Onyeneke ’17 has the kind of smile that you can hear.

You can easily visualize his beaming face and cheerful eyes. His laughter decorates conversation like confetti at a party and unmistakably emanates from a place of joy. For Onyeneke, his joy is in attending to God’s calling.

Onyeneke, who graduated from Saint Leo with a Master of Arts degree in theology in 2017, began his journey to Catholic religious life at his childhood home in Imo State, Nigeria. He recalled his interest began when he was an 8-year-old altar server.

“I fell in love with what priests do in the Eucharistic celebration, changing wine and bread into the blood and body of Christ,” Onyeneke said.

The youngest in a Catholic family of eight children (four sisters and three brothers), Onyeneke said he learned from his parents how the presence of Christ in the Eucharist can help resolve life’s difficulties.

Today, that zeal Onyeneke felt for the celebration of the Eucharist—and to serve people—has translated into years of study that will culminate in his ordination as a priest in the U.S. Catholic Church later this year.

“The Eucharist is the center of my life,” Onyeneke said.

It is no small coincidence then, that Onyeneke was assigned to Corpus Christi Church in the small town of Round Lake, NY, to complete his pastoral year for seminary. The church’s website states its mission as one clearly aligned with Onyeneke’s own: becoming the body of Christ by worshiping God and serving others.

“He jumped right in without hesitation—into a church with a large congregation and a lot of moving parts,” said Reverend Rick Lesser, pastor of Corpus Christi Church.

“I love to watch our community when Deacon Charles preaches,” Lesser said. “They become so engaged and are smiling back. He has this ability to elicit in others the joy he feels.”

Onyeneke quickly embraced the entire community, conducting half of the church’s daily Masses and a quarter of the weekend liturgies, developing adult education programs, and becoming involved in children’s faith formation. He also began regular visits to members of the congregation, many of whom are homebound.

Lesser also was impressed with the way Onyeneke adapted to the Catholic Church in America. “He was proactive about learning the difference between the American and Nigerian Catholic Churches,” Lesser said. “And did so with incredibly good grace.”

Onyeneke also has helped to integrate immigrants within the Roman Catholic Diocese of Albany (NY). His own experience provides a unique perspective on the challenges they face.

He is completing his studies for the Licentiate in Sacred Theology, an advanced degree with an emphasis on moral theology at Saint Mary’s Seminary & University in Baltimore, MD. He wrote, and will soon defend, his thesis on undocumented immigrants in the United States.

“Catholic social teaching says that laws should not deny any person human dignity and respect,” Onyeneke said. “Immigrants need a listening ear. Listen to their story, so they can integrate.”

For Onyeneke, as a graduate student living for the first time in the United States, that listening ear belonged to Dr. Randall “Woody” Woodard, chair of graduate studies in theology and religion at Saint Leo University. Realizing that Onyeneke knew little American English and few people but the Benedictine Monks of Saint Leo Abbey with whom he stayed, Woodard went out of his way to welcome Onyeneke into the Saint Leo University fold.

“Woody was there for me,” Onyeneke said. “I was lonely and had little money, but Woody made sure I had food and asked me to join him at soccer games—sometimes to watch the Lions, and sometimes to play a match.”

Perhaps more important, Onyeneke says, “We shared stories so that we learned about each other.”

He credits Woodard with helping him “fall in love with the Saint Leo community.” Onyeneke became very involved on campus, writing stories for The Lions’ Pride student newspaper and joining in student activities. He has especially fond memories of the Intercultural Student Association’s dinner, for which he cooked fufu, a West-Central African dish.

At the same time, Onyeneke says that immigrants have responsibility for their success in their adopted home country. Lesser said, “He has a very wise understanding of American culture and understands from his own experience the need for immigrants to adapt to American culture.”

Onyeneke offers this advice to those new to the United States: “Have patience, seek advice, and accept cultural differences. Rather than trying to hold onto your own culture, be open to American culture.”

Soon Onyeneke will complete his year at Corpus Christi Church. He is looking forward to his ordination and future assignment in the Diocese of Albany, NY. Lesser, with whom Onyeneke has roomed during his time at the church, said Onyeneke wakes with the Eucharist at the center of his life, so cheerful that he sings around the residence in the early mornings.

It’s a joyful noise, reflecting  Onyeneke’s love for God and serving people, which Lesser said he wishes he could bottle. “He’s going to be a gift to the people of God no matter where he goes.”