A National Champ—and So Much More

Marie Coors graduated last spring as the most accomplished student-athlete in Saint Leo University history, period. There is nobody even close.

The nature of collegiate women’s golf is such that few on the Saint Leo University campus probably ever saw Marie Coors swing a club or make a putt. Hers was probably never among the most recognizable faces among Saint Leo student-athletes.

But you can bet that on the golf course, in every tournament in which she played, the rest of the field knew exactly who Marie Coors was—and where she was on the scoreboard. She was simply that fearsome an opponent.

Individual national champion. Two-time Sunshine State Conference individual champion. National athlete of the year in her sport. Academic All-America of the Year for all of NCAA Division II.

Coors’ steely-eyed determination on the golf course gave way to equal resolve in the classroom. She graduated with a 4.00 grade point average, rounded; the only thing that marred her near perfect academic career was the A- she received in SLU 100, “First Year Experience,” a one-credit class during her freshman year after arriving from Gross-Zimmern, Germany. Coors concluded her Saint Leo experience as the recipient of the 2017 Clara McDonald Olson Scholastic Excellence Award, presented to the member of the graduating class with the highest GPA obtained over four years at Saint Leo.

She was Saint Leo’s first recipient of an NCAA Elite 90 Award, which goes to the student-athlete with the highest GPA in a national championship event. And the awards may continue to roll in well after this magazine appears in your mailbox.

Perfection is in the eye of the beholder on the golf course. What is the perfect way to play any given hole? What club is the right one for the situation? Victory can be a relative concept when the opponents are both your fellow competitors and the course itself. Not to mention the fact that excelling in a round of golf is as much cerebral as it is physical—but which is more important?

Over four years at Saint Leo, Marie Coors—a champion both in the classroom and on the golf course— made the question irrelevant because time and time again she triumphed at both. As a student and an athlete, she found perfection without being perfect.

And if you were among the relative few who saw her play or got to meet her in the hallways around University Campus, count yourself fortunate for the experience.

The Saint Leo softball team won its second consecutive Sunshine State Conference title, its third in five years, after posting a 17-7 record in conference and 37-15 overall. Since returning to her alma mater, head coach Erin Kinberger ’07 has guided her teams to 37 wins or more in her third straight season. Kinberger was named the SSC Softball Coach of the Year. 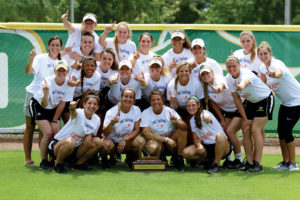 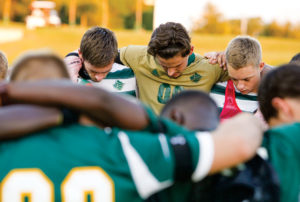 When you ask college coaches what makes their programs special, you may hear among their answers that the team is like a family. Some may even say their college is like home. Not all programs live up to that ideal, but when they do, great things can happen.

As the 2017-2018 year begins at Saint Leo University, we welcome two new head coaches—one who is returning home and the other who has found a new home.

When Coach Tony Paris first joined Saint Leo more than 20 years ago in 1996, he served as assistant men’s soccer coach. Working closely with Fran Reidy—then head men’s soccer coach and current director of Intercollegiate Athletics for Saint Leo—he quickly embraced the Saint Leo culture. He left in 1999 to work with a Scandinavian soccer club and returned the following year to start the women’s soccer program at Saint Leo. By 2003, the new program had a remarkable season and he was named the Sunshine State Conference Coach of the Year. Along the way, he committed himself to the core values, which he says speak to him and have stayed with him even when he is not at Saint Leo. “They are my road map,” he said. 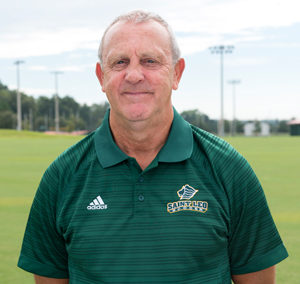 “It is a great opportunity that Saint Leo gave me to come back. For me, it isn’t work; it’s a passion, a love for this college.”
— Coach Tony Paris

In 2005, Coach Paris was lured away from Saint Leo once again, by the same Scandinavian club, but his heart remained with the Lions. Now, all these years later, he has returned to Saint Leo to serve as head men’s soccer coach. “It is a great opportunity that Saint Leo gave me to come back,” he explained. “For me, it isn’t work; it’s a passion, a love for this college.”

Meanwhile, halfway across the country, Coach Rick O’Dette had been enjoying a successful run at St. Joseph’s College, a private Catholic institution in Rensselaer, IN. Over 17 seasons as head baseball coach for his alma mater, he had amassed a 494-407-4 overall record and led the Pumas to NCAA Regional play four times. He was dug in, surrounded by staff, faculty, students, parents, and players who really were like family. 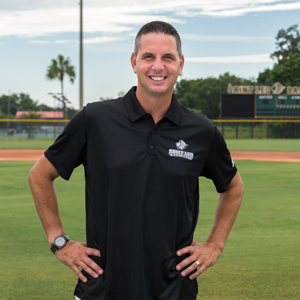 “My family and I are thrilled to be part of this great community.”
— Coach Rick O’Dette

During the 2016-2017 year, Coach O’Dette and the rest of the St. Joseph community learned that the college was experiencing financial difficulty—so dire that the school would close at the end of the academic year. Telling his wife, Sherry, and his children, Ricky and Alyssa, was “the worst night of my life,” he said. Suddenly faced with losing his home, both on the field and off, O’Dette and his family were searching for a new place to live and work.

To the benefit of the Lions, Coach O’Dette chose Saint Leo as his new home and joins the university as its new head baseball coach this year. As an added bonus, many St. Joseph Pumas fans have stated they are now Lions fans and will be following Coach O’Dette’s success at Saint Leo.

“I feel fortunate to have found a situation similar to St. Joe—the people, the administration, all caring about the players,” said O’Dette. “My family and I are thrilled to be part of this great community.”