Following the Saint Leo men’s golf program’s historic National Semifinal finish in the 2015 NCAA Division II Men’s Golf Championships, here’s a look at a Lion who continues to succeed in the
golf industry. 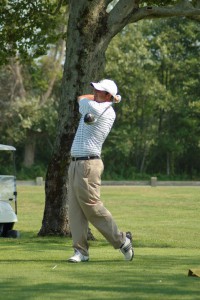 Marc Bayram was a four-year starter for the Saint Leo men’s golf team before earning his undergraduate degree in business administration with a minor in golf course management. He immediately put his experience inside and outside of the classroom to use by working in the golf industry as a teacher, coach, and administrator. He began his teaching career at Plantation Palms Golf Club in Land O’Lakes, FL, and was also the head coach of nearby Sunlake High School. Marc also gave back to Saint Leo golf during that time, serving as an assistant golf coach for both the men’s and women’s programs.

“Seeing the success of the [2015] team has made me a really proud Lion. I know how tough the competition is in the Sunshine State Conference,” said Bayram. “Many players I played against during my years at Saint Leo have made careers on the PGA Tour and Web.com Tour. To see the current team doing so well in such a competitive environment is really special, and I would not be surprised to see one of them playing on TV someday.”

Returning home to Connecticut in 2008, Bayram served as the assistant golf professional at Shuttle Meadow Country Club in Kensington, CT. He further ascended the career ladder in 2011 when he became the head golf professional at Timberlin Golf Club, where he continues to share the game and his experience with others. Marc is a Class-A PGA member and has devoted his professional career to the PGA of America and the growth of the game of golf. He has been an active participant in PGA programs and was recognized as the 2012 Merchandiser of the Year and 2015 Youth Player Development Award winner in the CT section PGA.

Marc resides in Berlin, CT, with his wife, Kat, and children Shelby-Mae, Marc, and Max.

“I am very fortunate to have a career that I enjoy,” Bayram added. “Being able to support my family with a job doing something I love would not have been possible without my Saint Leo education and experiences as a student-athlete.”