Thomas J. Kaiser, MD, is achieving what many young biology majors everywhere hope for when they first walk into the science classrooms and labs. 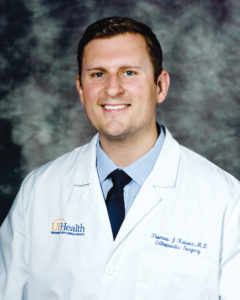 Kaiser, 30, is well on his way to becoming an orthopedic surgeon and specialist, a possibility he began contemplating as a high school and college athlete. The former Lions basketball forward (No. 25) is currently in the fourth year of the five-year residency program at the University of Florida Health System in Jacksonville. Residency is the period right after medical school (or other physician training) when licensed new graduates work under the tutelage of more senior doctors to acquire in-depth training in a particular area. Examples are family medicine, pediatrics, cardiology, or in Kaiser’s case, orthopedics—the care of the whole skeletal system of bones, muscles, ligaments, and joints.

While the young doctor (and newlywed) still has some milestones to pass, Kaiser has already completed the three most intense years of his residency program. Just getting an orthopedic residency is an accomplishment in itself. New doctors have to compete for limited spots; those who are not admitted have to make another plan.

Kaiser remembers first becoming intrigued with skeletal repair when he was growing up and attending Catholic schools in Tampa. Service projects periodically brought him to Shriners Hospitals for Children-Tampa, where his mother worked as a nurse. He encountered children who came from as far as Central America for procedures to repair limbs, and he discovered orthopedic medicine.

Looking back at his time at Saint Leo, Kaiser credits the rigor of being a student-athlete with instilling in him good time-management practices. Another benefit was being able to get to know and shadow the men’s basketball team physician for a couple of seasons, which further honed his interest in orthopedics. He may even seek a fellowship in sports orthopedics after this residency.

Academically, Kaiser was influenced by Saint Leo faculty to learn to look at problems in multiple ways for solutions, and to be a lifelong learner. That adaptability is vital in orthopedics, because so many different activities, maladies, and accidents require treatment, and patients span generations. So it is vital that orthopedists be able to work with all kinds of patients and be open to new or varied treatment options.

There are multiple challenges for the patient, too. The healing process involves more than just surgery. There is usually physical therapy, and patients may feel lonely, stuck, or withdrawn for a while. Things turn for the better as patients regain mobility and their spirits lift, Kaiser said. Then comes the point where the young doctor sees in his patients’ lives his professional reward: “Getting them back to functioning, back to their life before.”