When Dr. Maribeth Durst arrived at Saint Leo College in 1979 as a new assistant professor of sociology, she could have had no idea that her career path would evolve to include so many roles and duties in teaching, administration, and even the pursuit of another advanced degree. At the end of this academic term, Dr. Durst will retire after 36 years at Saint Leo, the final 10 serving as the vice president of Academic Affairs—in other words, Saint Leo’s steward of excellence in teaching and degree offerings. 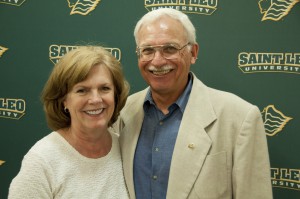 Saint Leo was not Dr. Durst’s first teaching post—that was at Saint John’s University at its Staten Island, NY, campus in the late 1970s. But in academia and other sectors, opportunities to advance were scarce. Dr. Durst and her first husband came south when the Saint Leo sociology position opened, and he found a position in Tampa in his field. Dr. Durst began teaching the sociology courses in the catalog at the time. However, in what was to become a continuing theme, she saw a spot where she could make a contribution and developed the course “Women in America” as an option to the early 1980s curriculum.

In those days, women were not yet well represented in teaching or administration, and the concept of work-and-family balance had not emerged. But as a young working mother in rural St. Leo in the early 1980s, Dr. Durst found infant child care for her son, David, practically next door with the Sisters of Holy Name Monastery, the Benedictine nuns who have always been involved with Saint Leo.

Then a “real life-changing event” occurred in the spring of 1983, she recalled. A female student came to see her, at the suggestion of an administrator. The young woman was being battered by a boyfriend and she didn’t know how to get out of the situation. Dr. Durst had degrees in both sociology and anthropology (her doctorate), but not the specific skills to guide that student or others in such peril.

Her response was to take a course in social work, and she became hooked. Over three years, she earned the Master of Social Work degree. This helped inform her leadership and also qualified her to teach social work courses, along with anthropology and sociology.

She loved infusing community service requirements into her teaching and class requirements, as well. She remembers a young man who disliked the service requirement initially, but then grew to enjoy the time he spent helping coach students at the nearby Saint Anthony of Padua Interparochial School. Some of the young boys just wanted an older guy to talk to, he found. He so enjoyed it that he began explaining his community service to his mother during a long-distance phone call. At first, she didn’t understand. She feared his service was a judicial sentence and exclaimed: “What crime did you commit?” That anecdote is one of Dr. Durst’s favorite stories.

Dr. Durst also found it fulfilling to work in a college with Saint Leo’s generous spirit. “We accept any student who exhibits a chance to be academically successful. Even though we have high standards, we will give students a chance who haven’t necessarily been successful before.”

Her dedication to teaching was recognized twice with a campus award for Outstanding Faculty Member from the Student Government Association, first for 1987-1988, and again in 1996. By then, she had been promoted to a full professor of sociology and social work. During her career, she also took on a variety of administrative tasks on the academic side, as needs emerged.

Eventually, she began working for the university on years-long work related to the college’s accreditation from the Southern Association of Colleges and Schools*. President Kirk assigned Dr. Durst the painstaking role in 1998, concurrent with her work as dean of the School of Education and Social Services (she had also held accrediting responsibilities at an earlier point, from 1988 to 1991). It was an arduous time as Saint Leo worked to reverse enrollment declines and prove itself. But Saint Leo did recover, did attract more students, and innovated with online learning. Saint Leo became a university in 1999, in recognition of the addition of master’s degrees in business and education.

In 2005, the vice president of Academic Affairs position became open, and at first Dr. Durst did not apply. However, she noticed that even the best of the applicants did not seem to take the institution or its potential seriously enough. In her mind, they regarded Saint Leo only as a “stepping stone to further their own careers.” She realized she was more invested in the university’s continued success, and therefore applied and earned the vice president’s job.

It has been a busy decade since, marked by more improvements. New faculty take part in an extensive mentoring process, for instance, to ensure they truly understand and support the student-centered, teaching orientation of the university. Undergraduates have an innovative liberal arts program that nurtures the development of critical thinking across multiple disciplines. A Master of Social Work degree program has been added, along with the Doctor of Business Administration. Something Dr. Durst didn’t foresee happening in her tenure—a second new academic building—is undergoing rapid construction, and it will be ready for Fall 2015.

Equally as important, Saint Leo is now recognized as a strong teaching-oriented institution, dedicated to the development of the whole individual, who may well have multiple careers over a lifetime. “Many American universities have lost their way,” Dr. Durst says. “They’re more interested in research than in teaching, and teaching is a by-product. Our responsibility is to teach our students to fulfill a productive role in society, and to give back to others.”