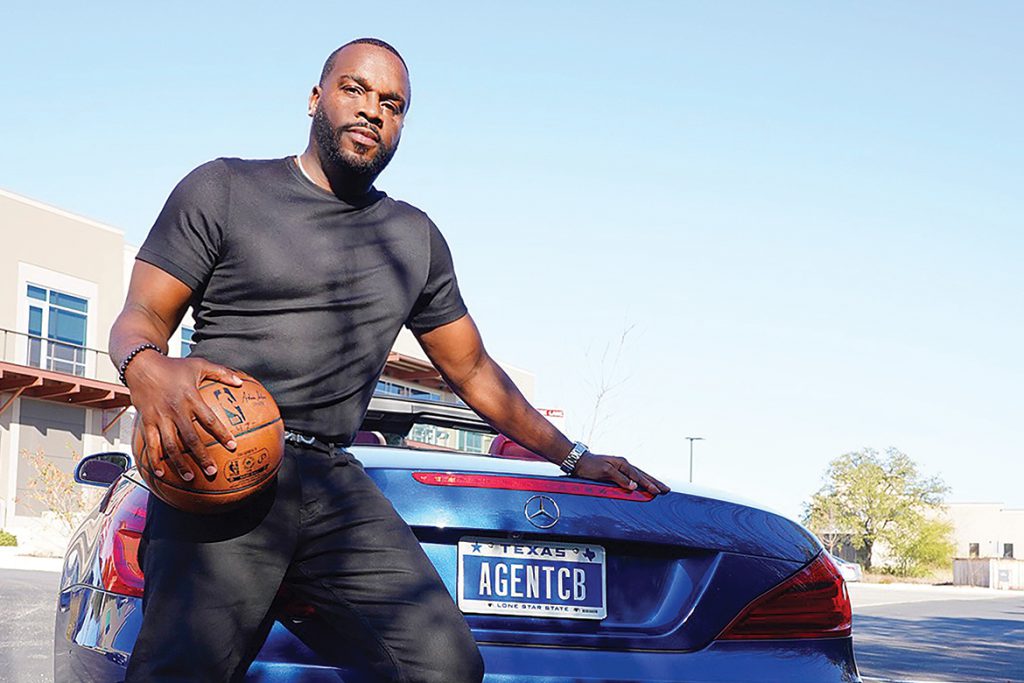 Sometimes dreams change. For alumnus Colin Bryant, his dreams of a pro basketball career were dashed by an injury. But now Bryant is a highly successful sports agent and executive, who not only helps college basketball players go on to play professionally, he also prepares them for life.

Helping young people succeed is Bryant’s mission in his career and in his life. Bryant earned his Master of Business Administration degree with a specialization in sport business in 2015, fulfilling a promise to his parents. He left college as an undergraduate to help his friend, NBA broadcaster and former player Antonio Daniels, when Daniels was drafted by the then-Vancouver Grizzlies. With that experience, he became a certified sports agent, but he also completed his degrees.

Bryant and Daniels were childhood friends growing up in Columbus, Ohio, playing basketball at St. Francis DeSales High School, a Catholic school in Columbus. “Growing up in Columbus, Antonio was my best friend,” Bryant said. “We played all the time with dreams of going to the NBA. We were on track for our dreams to come true.”

Both skilled players, Daniels earned a scholarship to Bowling Green State University in Ohio, while Bryant earned a full-ride basketball scholarship to California Polytechnic State University, San Luis Obispo. But Bryant’s dream was derailed by a hip injury and a broken jaw his senior year at Cal Poly. “At the time, I was maybe a year shy of getting my degree,” he said.

Instead, Daniels was selected by the Vancouver Grizzlies with the fourth overall pick of the 1997 NBA draft. It was for Bryant, the “opportunity of a lifetime to help him. He wanted me to come.”

Daniels, now the color analyst for the New Orleans Pelicans, said he has been through “heaven and hell” with Bryant. “The Lord has blessed us to evolve together inside each other’s lives,” Daniels said.

Bryant dropped out of Cal Poly and moved to Vancouver, British Columbia, accompanying his friend. “He signed a three-year, $8 million contract,” Bryant said of Daniels. “We were 22 years old, and off to fend for ourselves.”

While Daniels had one of the top sports agents at the time, he did not receive attention, and Bryant took over that role. He began marketing Daniels, and thought, “‘this could be something that I could do.’”

By end of the rookie year, Daniels was traded to the San Antonio Spurs in Texas. “That was a blessing in disguise for both of us,” Bryant said. “He went from the worst team in the league to winning the 1999 NBA championship.”

Bryant learned the business of the NBA from Spurs management and players, including Gregg Popovich, R.C. Buford, David Robinson, and Tim Duncan, and he eventually was certified as an NBA agent.

But Bryant never forgot the promise he made to his mother and father about completing his degree. He said, “Although I was practicing in the industry, I made it a priority to pursue my education.”

He enrolled at the University of Texas-San Antonio and completed a semester. Then Daniels was traded to the Portland Trailblazers. Due to the rigors of his career and travel schedule, it was impossible to be in the classroom, so Bryant decided to focus on his blossoming career. During this time, he signed more players, including Raymond Felton, Damian Wilkins, Acie Law, and his biggest client Rashard Lewis, whom he negotiated a $100 million-plus deal with the Orlando Magic.

“But through it all, that promise I made and the desire to get a degree was always on my mind. I felt empty,” Bryant said. “Although, I was achieving at a high level, I knew I could do so much more.”

In 2011 he was inspired by the birth of his daughter Bella. “I took my role as a father seriously,” he said. “I didn’t want to be a hypocrite and push education when I hadn’t completed my degree. I wanted to be someone she  could look up to.”

As online education became more prevalent, Bryant completed his degree in management from the University of Phoenix. “But I had a thirst for more knowledge,” Bryant said. “I became more comfortable with online learning and better appreciated the value in the convenience that it afforded me. I had the hands-on experience [as a sports agent], but I wanted to add technical knowledge, case studies, and I was looking for the best school to attend.” He was impressed by Saint Leo’s curriculum, and the enrollment process was easy, but it was a busy time in his career and life.

At the time, Lewis was playing for the Miami Heat with Lebron James, Dwayne Wade, and Chris Bosh. “I was studying on airplanes, in hotels, after games, and anywhere I could,” Bryant said of his Saint Leo studies. “I was a young father with a lot of responsibility, but I was committed to my studies at Saint Leo. I had late nights and early mornings. But I also had the support from my teachers and classmates. It was the community that I needed to fulfill my dreams.”

Bryant understood that earning his MBA with a sport business specialization was a way to sharpen his blade, add skills, and meet personal goals. “It makes me more efficient as an agent, a businessman, and an entrepreneur,” he said.

He completed his last 40-page paper after attending the NBA draft, rushing back to his hotel to finish it. “I earned this degree!” he said. “I have achieved a lot, but this was one achievement that I hold close to my heart and that brings me a strong sense of pride. I framed my degree right away.”

Bryant said Saint Leo improved his skills in communicating online with people around the world and working with others in business settings. “It was preparing me for pandemic life, five years later,” he said with a laugh. “I was connecting with people all over the world. I’m glad I got a chance to do it later in life and appreciate the information I learned. It helped to further develop my 40-year-old executive mindset.”

Daniels said Bryant’s greatest attributes are his work ethic and attitude. “Even though things have not always gone his way, he has not stopped working,” the NBA broadcaster said. “Most people would quit. He has bent, but he has never broken.”

Now, Bryant is the president of Max Deal Sports, a full-service sports management firm in Houston, Texas. In his role, he helps players navigate the world of professional basketball, preparing them for futures on and off the court. He talks to players and tells them it’s never too late to complete their degrees. “Basketball has an expiration date,” Bryant said. “You have to prepare for life after.”

He cites some of the players he represents, who have earned their degrees including Aric Holman (Mississippi State), Jordan Bone (Tennessee), and Jordan Bowden (Tennessee). He also represents Simi Shittu, who left Vanderbilt University after his freshmen year and is in the process of finishing his degree while playing professional basketball in Israel.
He gives back to the community by coaching Bella’s team and hosting a summer youth basketball camp with Daniels.

Bryant gives back to his community and focuses on the next generation by coaching his daughter’s sports teams, operating a youth basketball camp that he and Daniels created in San Antonio 20 years ago, and he is establishing a foundation to help urban city youth understand the importance of education while pursuing athletics.