Saint Leo University President Jeffrey Senese is a visionary higher education leader who brings a wealth of experience and unique perspective to the university, having held leadership positions at several universities across the United States.

In his first year at Saint Leo, President Senese rallied the university community to support a bold, three-year strategic plan that will strengthen the foundation of our 130-year-old institution. His vision for the university’s future is focused on offering strong academic programs that lead to jobs with high market demand, strengthening the student experience, and growing Saint Leo’s footprint across the nation.

He is a dynamic leader with an incredible passion for learning. Get to know the president of your alma mater by reading his responses to these 15 questions.

Describe yourself in three words.
“Determined, optimistic, and sociable.”

What was your first job?
“A dishwasher.”

Can you play any musical instruments?
“I played the trumpet and the baritone horn back in the day.”

What is your favorite thing about Florida?
“I love the people with all their quirks, as well as the weather.”

Do you have pets?
“Yes. A yellow Lab named Enzo, and a French bulldog named Norman.”

What is your favorite book?
“The Count of Monte Cristo by Alexandre Dumas.”

What is your favorite food?
“Steak.”

What is your favorite Bible verse?
“Jeremiah 29:11:  For I know the plans I have for you,’ declares the LORD, ‘plans to prosper you and not to harm you, plans to give you hope and a future.’”

Where is the most interesting place you have ever been?
“Iceland.”

Describe your perfect Saturday.
“Reading . . . a nice long run . . . and then maybe a bit more reading.”

Name two people who inspire you.
“My father and faculty who taught me.”

What is something you want to learn more about?
“I am reading several books about the future. I would like to know more.”

What piece of advice do you give your children?
“Read. Do the job right the first time no matter how difficult. Be nice.”

What excites you the most about Saint Leo University?
“Our wonderful faculty and staff and our amazing potential for the future.”

Note from the Alumni Association President

I first want to welcome the Class of 2016 to the Saint Leo University Alumni Association. You are joining a dynamic and diverse group of alumni totaling more than 82,000 and spanning all 50 states, Washington, DC, three U.S. territories, and 76 countries. Needless to say, our Saint Leo is far-reaching and impressive.

I also want to welcome this year’s eight new members to the Alumni Association Board of Directors. I look forward to working with you, and the returning board members, as we continue to work toward our goals of engaging alumni, identifying new ways to better support Saint Leo alumni, and expanding awareness of the great things our alma mater is doing in education and community service.

Events on Campus and on the Road

Saint Leo alumni, students, and friends come together—at University Campus, at education centers, and in different cities—to reconnect with old friends and classmates, network with new friends, and have fun. Check out the calendar of events to make sure you don’t miss out. 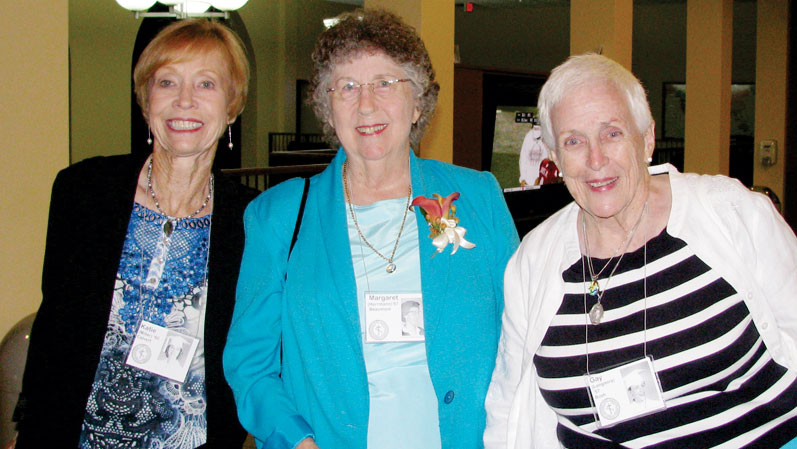 On February 6, 2015, Dr. William J. Lennox, Jr., the former superintendent of the United States Military Academy, was named the ninth president of Saint Leo University by the university’s Board of Trustees, effective summer 2015.

Since 2008, Dr. Lennox has been a member of the Saint Leo University Board of Trustees and has served as chair of the Academic Affairs Committee.

“We are so pleased that Dr. Lennox will assume the presidency of Saint Leo University,” said Cindy Brannen, chair of the Board of Trustees. “As a board member, he is already familiar with the university and understands its unique structure. We are confident that he will continue to accelerate the upward trajectory that outgoing president, Dr. Arthur F. Kirk, Jr., initiated and sustained for 18 years.”

A retired U.S. Army three-star lieutenant general, Dr. Lennox earned his bachelor’s degree in international affairs from the United States Military Academy at West Point, NY. He went on to earn a master’s degree and a PhD in literature from Princeton University, writing his dissertation on American war poetry. He was first in his class at Fort Leavenworth’s Command and General Officer’s School, and he completed the Senior Service College Fellowship at Harvard University.

General Lennox became the superintendent of the United States Military Academy in June 2001. As superintendent, a role that is essentially the equivalent of president at a civilian college, he managed 4,400 cadets, hundreds of staff, the academic programs, and a $250 million budget on the 16,000-acre campus, and remained in that role until 2006. During his tenure, he provided strategic direction for the academic, military, and athletic initiatives. He helped transform the athletic program and oversaw upgrades to the core liberal arts program while sustaining the fourth-ranked undergraduate engineering program in the country. He also implemented and improved opportunities for cultural exposure and expanded semesters abroad to countries including Chile, China, Russia, and Spain. While at West Point, General Lennox completed a $150 million fundraising campaign with more than $220 million, resulting in enhancements to the academic, athletic, and military programs.

After graduating from West Point, General Lennox served in a wide variety of assignments in the field artillery. Additionally, during the course of his distinguished 35-year career, he held a number of staff positions, including a White House Fellowship, as the special assistant to the Secretary of the Army, and as the executive officer for the Deputy Chief of Staff for Operations and Plans.

From 2006 to 2012, Dr. Lennox served as senior vice president at Goodrich Corporation, a Fortune 500 aerospace firm, in Washington, DC. In that role, he was responsible for developing and executing strategy for the company’s Department of Defense programs and for interacting with Congress, the executive branch, state and local governments, and aerospace contractors.

“I know first-hand that Saint Leo is a special place,” Dr. Lennox commented. “In my role on the Board of Trustees, I have seen this institution undergo remarkable growth in the last several years. Art Kirk has led this university with grand vision, innovation, and execution, and we are all grateful for his tireless efforts. In the next few months, I look forward to getting to know our faculty, staff, and students, as I prepare to work with them to make Saint Leo even stronger than it is today. I am honored to take on the role of university president.”

Dr. Lennox and his wife, Anne, have three sons: Andrew, Matthew, and Jonathan.