About your Alumni Association

Whether you are among our newest alumni or have not been active within the alumni association, here are some details to know:

Details on all this and much more are available at your.saintleo.edu.

Note from the from the Alumni Association President

A special welcome to the Class of 2018! You are now a valued member of our Saint Leo University Alumni Association family.

We encourage all 93,000 alumni around the globe to actively support our many activities and programs; stay connected with the latest news and happenings on our website and social media channels; join your fellow alumni during networking and chapter events; and give back your time, talents, and treasures in support of our university. Visit your alumni website—your.saintleo.edu—to learn more.

I also would like to recognize and thank this year’s Saint Leo University Alumni Association Board of Directors for their dedication to our mission. Together, we are working to foster a mutually beneficial relationship between Saint Leo University and alumni. We hope our leadership actions, volunteerism, and giving inspires all alumni to engage and support our alma mater.

Saint Leo Career Services is excited to announce the launch of Handshake, the go-to career services platform for Saint Leo alumni and students. The new online site offers several resources for alumni and students who are looking for career guidance, seeking a new job, or looking to find that perfect new employee.

Visit Career Services Handshake and check out the site today.

As a job seeker, you can:

As a prospective employer, you can:

We are excited to welcome the Virginia Peninsula Alumni Chapter and the Virginia Southside Alumni Chapter to the pride! If you are in the Tidewater, VA, or Tampa Bay, FL, area, be sure to check out the alumni chapter events for great opportunities to network, participate in service projects, and have fun. Chapters will also be forming in Ocala, FL; Savannah, GA; and Jacksonville, FL, this fall. 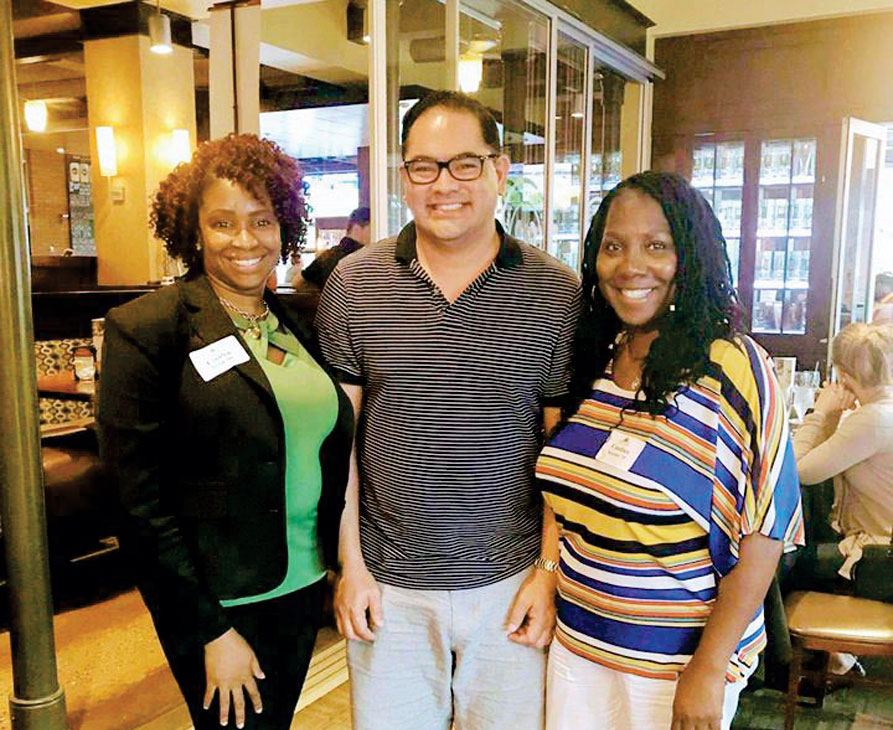 Roaring Onward is a recognition program established by the Saint Leo University Alumni Association to celebrate outstanding alumni who have graduated within the past 10 years. Selection is based on professional success, contribution to their communities, and living the university’s core values. Recipients possess the qualities that embody the spirit of Saint Leo and a commitment to further strengthen their alumni community. They are Lions who are truly making a difference!

Michael Lydon ’07 is the director of North American Talent Acquisition for INC Research/inVentiv Health, a fully integrated bio-pharmaceutical solutions organization in the market. In his role, Lydon leads a department of 40-plus managers and recruiters who are responsible for hiring more than 1,500 employees in North America and 3,500 employees globally. He regularly participates in a number of local community charities, including the Pancreatic Cancer Center, Trinity Cafe, and Hope Children’s Home. His most memorable Saint Leo moment was when he first met his wife, Jamie (Porrevecchio) Lydon ’08. Given the university’s diversity, Lydon credits Saint Leo for helping him learn how to collaborate and communicate with individuals from all over the world. These invaluable skills have accelerated his success and enabled him to make a positive impact in the corporate world.

Latoya Gary ’11, MBA ’13 is a senior accountant for the Marion County (FL) Public Schools finance department. She plays a vital role in the day-to-day operations of the district—from handling budget preparations to analyzing financial data. She participates in United Way fundraisers hosted by the district and regularly volunteers at church by serving on the Hospitality Committee. Her favorite Saint Leo memory is the networking receptions. While she attended Saint Leo online, these receptions allowed her to network and meet new friends.

Sherman Milton III ’13 is a Realtor® for Florida Heritage Real Estate Group in Dade City (FL). Since joining the real estate world, he has helped many first-time buyers fulfill their dreams of becoming homeowners. Being one of the youngest agents in his association, he has a busy work schedule, but he still finds time to give back to his community. During his free time, he tutors at the Boys and Girls Club and mentors for the Pasco Education Foundation. Milton’s favorite memory of Saint Leo is his SERVE (Students Engaged in Rewarding Volunteering Experiences) trip to Ecuador during his freshman year. There he had the opportunity to teach English and computer skills at a local school.

Kimberly Patterson ’15 is a crime scene technician with the Lakeland (FL) Police Department. She works in all aspects of criminal investigation, including forensics, crime scene investigation/reconstruction, forensic photography, and courtroom testimony. Patterson has received numerous meritorious service awards from the Lakeland Police Department, and she actively participates in community projects sponsored by the department. She says that Saint Leo’s core values create a foundation upon which students can build to become morally responsible professionals and leaders.

Jeri D. Prophet ’13 is the founder and CEO of lntellecTechs, Inc., a Virginia Beach (VA) firm specializing in a full range of information technology products and services. Prophet has been recognized for numerous awards, including the 2015 Still Hope Foundation’s Entrepreneurial Excellence Award, the 2014 Entrepreneurial Excellence Honoree, the 2012 Women in Business Honoree, the 2012 Still Serving Award, and the 2009 Top Forty Under 40 Honoree. A service disabled veteran, Prophet started NowHiringVeterans.com, a free veteran/employer matching job placement service website. Her favorite Saint Leo memory is walking into Professor Elliott Seagraves’ music class and realizing Professor Seagraves was as passionate about music as she was about computers, and there would be no leaving early.

Jesse Suarez ’11 is a second-year internal medicine resident at Brandon (FL) Regional Hospital. Following completion of his residency training, he plans to enroll in a fellowship in cardiovascular medicine. Born and raised in the Tampa Bay area, he is engaged with community-based activities involving the American Medical Association and his residency program. He also volunteers frequently with the American Heart Association. Following completion of his training, he plans to return to the Tampa Bay area and serve his community as a cardiologist. Suarez says his favorite Saint Leo memory was being a member of the baseball team, through which he formed lasting relationships with his coaches and teammates, and served as captain during his junior and senior seasons. To Suarez, being a Saint Leo Lion means being a part of a collective that embodies the university’s core values.

Brendan Cahill ’10 is the senior manager for Payer Marketing and Strategy at Valeant Pharmaceuticals, in Bridgewater, NJ. He is an active member in Team Red, White & Blue, an organization whose mission is to enrich the lives of America’s veterans by connecting them to their community through physical and social activity. Cahill’s proudest professional moment is when he placed first in his class in Basic Training with the National Guard. In fact, he is still active in the Guard and serves as the executive officer of his unit, with the rank of first lieutenant. His fondest memories of his time at Saint Leo are playing on the lacrosse team and creating lifelong friends.

The Alumni Association Board of Directors is excited to announce the return of the alumni award program to Saint Leo. At Brunch with the President during Homecoming 2017, Dr. William J. Lennox Jr. continued the tradition of presenting the Benedictine Spirit Award and revived the presentation of the Distinguished Alumni Award. 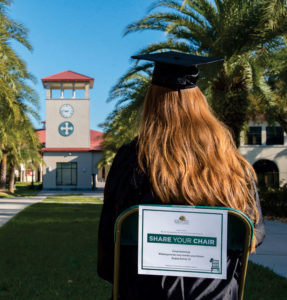 Last year, a special campaign was introduced to celebrate the graduating class while raising funds to enable members of future graduating classes to achieve the same success. We look forward to continuing this honor with the Class of 2018.

Your donation of $20.18 or more allows you to write a message that will be displayed on the backs of the graduates’ chairs during the University Campus commencement ceremonies in April. Your gift will help future classes while your message will inspire the current graduating class.

Donations and messages must be received by April 20 and can be submitted online by visiting your.saintleo.edu/chair or calling the Office of Alumni Engagement and Sustained Giving at (352) 588-8667.

Take Saint Leo along on your summer vacation! Download Fritz at your.saintleo.edu/flatfritz and snap a photo of you and Fritz at your destination. We hope to include your photos in future issues of Spirit. Send your photos (hi-res, if possible) to news@saintleo.edu with the subject line: Alumni Travel. Be sure to include your name, class year, names of anyone in the photo, and where you are pictured. Share the photo on Saint Leo University’s Alumni Facebook page using #MySaintLeo #FlatFritz #SaintLeoFritz 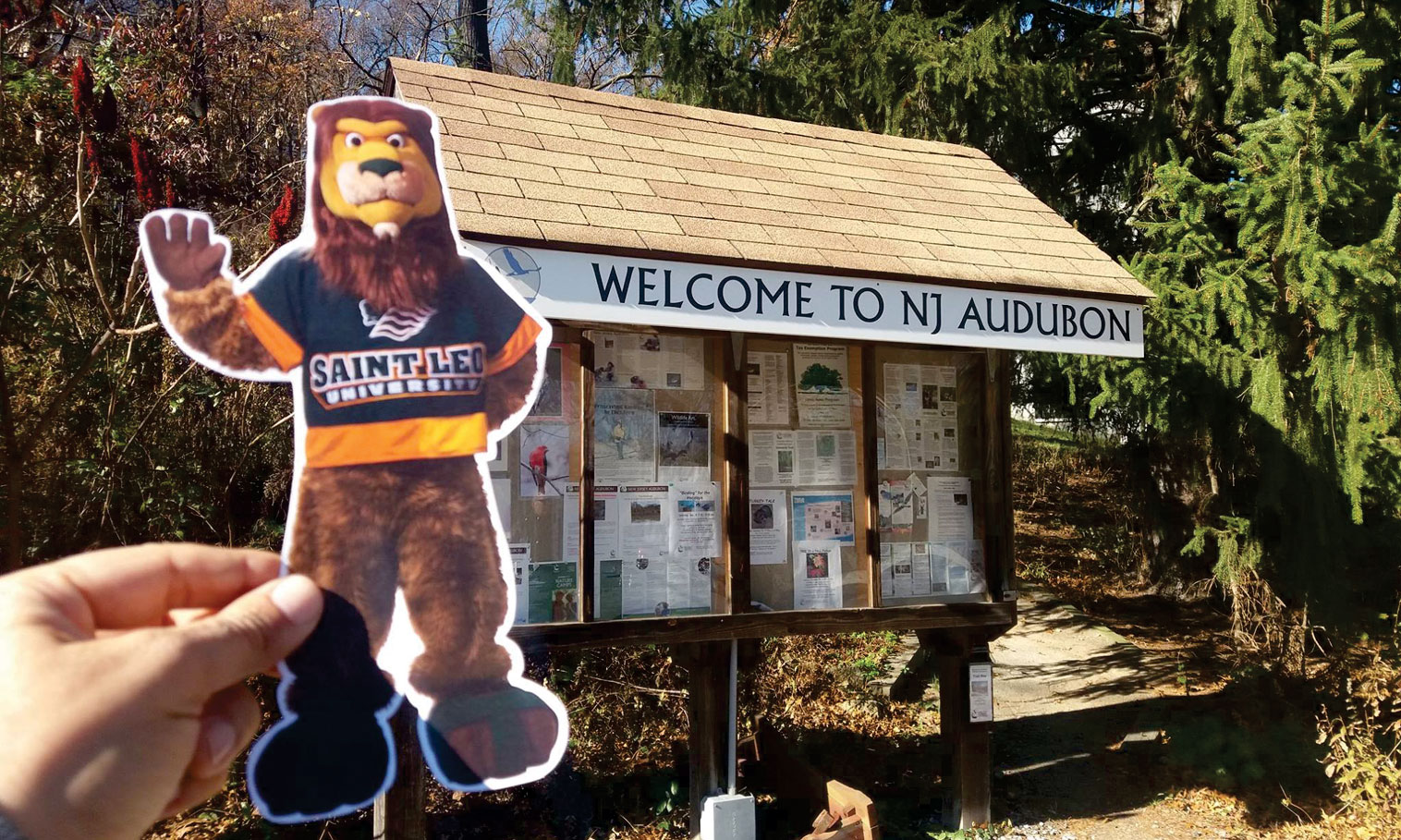 2017-2018 Alumni Association Board of Directors

Coming Home to You Tour Returns 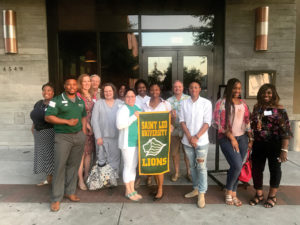 In July, your Alumni Engagement & Sustained Giving team hit the road with the return of the Coming Home to You Tour. With stops in Norfolk, Virginia Beach, and Hampton, VA, alumni and students had a chance to network and have fun.

The tour will return this spring—so be on the lookout for the stop closest to you, and join in the fun!

With commencement season behind us, it is time to welcome our newest graduates into the next phase of their Saint Leo experience. Be sure to keep your contact information up-to-date and visit your.saintleo.edu often to learn about all of the exciting things taking place.

Whether you are just graduating or simply haven’t had time to get involved yet, be sure to: 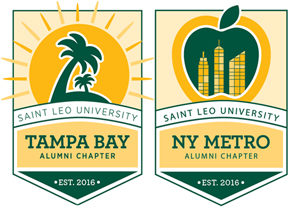 Saint Leo has made its mark in New York City and Tampa—what cities will be next? Alumni chapters provide a great opportunity for Saint Leo alumni to come together to network, help spread the word to potential new students, complete community service projects, and have fun—all in their own backyards. To find out how to start an alumni chapter in your area, visit your.saintleo.edu/chapters. 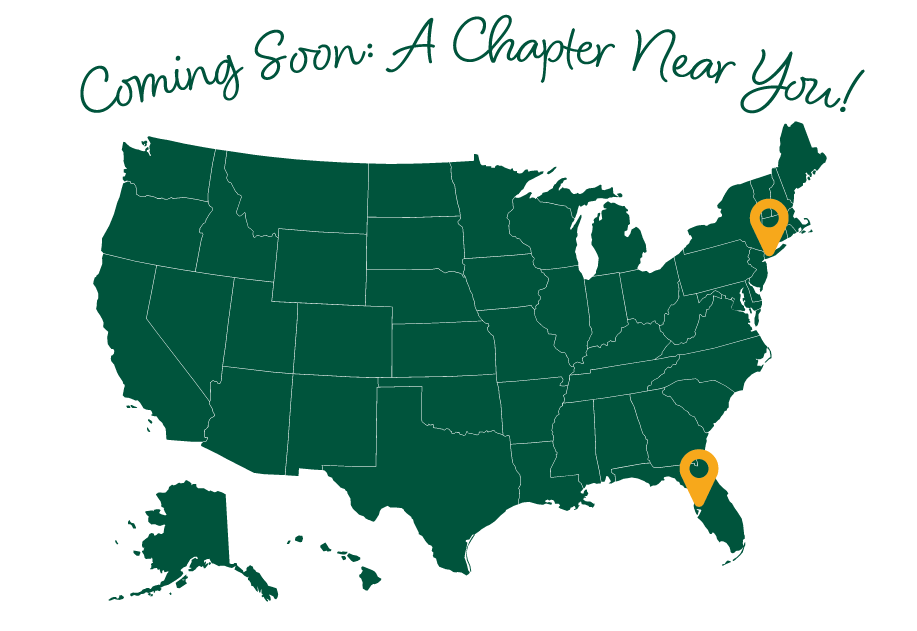 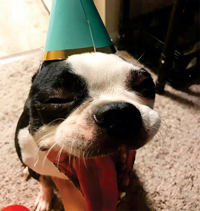 Do you have a unique, special, or just plain wonderful pet? Please send us your photos (high-resolution, print quality if possible) for possible inclusion in an upcoming issue of Spirit magazine. Dogs, cats, pigs, horses, iguanas, parakeets, and more—all are welcome! Be sure to supply: your name and class year, the pet’s name and breed, and what makes your pet great. Send to news@saintleo.edu, subject line: Saint Leo Pets

This Is My Saint Leo!

In May, members of the Class of 1962 (above) celebrated their 55th reunion. The weekend included a reception on campus, providing an opportunity to revisit familiar places as well as tour new ones.

Fred Edwards ’47 shared the images (below) with classmate Mickey McLinden ’47. The left photo was taken the day the pair “borrowed” the Benedictine brothers’ truck and took it to Dade City, something they got docked for weeks by Father Raphael for doing. The other photo was taken 60 years later in front of the same model truck. “Those were the days!” 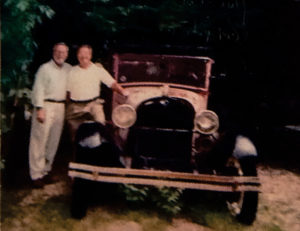 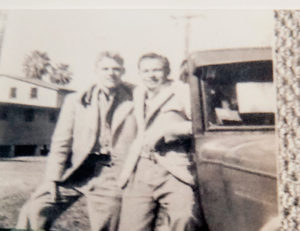