On December 18, 2015, Saint Leo University alumnus Clarence Ervin made history when he became the first African-American promoted to the rank of brigadier general in the 67-year history of the North Carolina Air National Guard (NCANG).

Brigadier General Ervin graduated from Saint Leo with an associate degree in 1981 and a bachelor’s degree in 1983, both in business administration, from Homestead Air Force Base in Florida. He later earned a master’s degree in health administration from Pfeiffer University in North Carolina. He is a graduate of the U.S. Air Force Air Command and Staff College and the Air War College.

“It means a lot to me,” he said of becoming the first African-American brigadier general for the NCANG. “But it means more to inspire those minorities coming behind me. I want to inspire others to let them know this is possible. It [the promotion] gave me the opportunity to be that conduit to say ‘You can do it.’ It may take a while, but perseverance pays off.”

In this role, Ervin serves as the NCANG chief of staff, and his duties include advising the adjunct general on personnel issues, directing the headquarters’ staff, working with the guard on a national level, and helping with strategic planning.

Originally from South Carolina, Ervin first studied biology at Winthrop University in Rock Hill. Hard pressed for tuition, he joined the U.S. Air Force in 1979 as a fuels specialist to earn enough money to finish his degree. While stationed at Homestead Air Force Base, he enrolled at Saint Leo University’s education center at the base. “I started out [at Saint Leo] because of the convenience, but once I got in and saw the value of the classes, I was hooked,” Ervin said.

In civilian life, Ervin works for the North Carolina Department of Health and Human Services as assistant chief for Acute and Home Care Licensure and Certification. He credits his Saint Leo education for helping advance both his military and civilian careers. Ervin points to his Saint Leo experience as one of the most important beginning points in his life—one that set him on the path to future success. 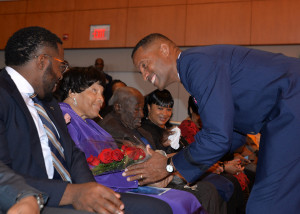 Ervin left active duty in the U.S. Air Force in 1983 and joined the NCANG two years later. He earned his officer’s commission in 1988 when he graduated from the Academy of Military Science at McGhee Tyson Air National Guard Base near Knoxville, TN.

“My military career has been my ministry,” said Ervin, who added he never really wanted to join the military. “When I got out in 1983, I said I would never join again. But life events led me back.

“I have the opportunity to share my commitment to the military with so many people. I hope to provide skills to my fellow airmen to follow in my footsteps and be successful in life in general. That is my way of giving back.”