The natural desire for families to do things together makes it unsurprising that many often choose to learn together, too. Each year, Saint Leo serves as the choice university for myriad families. There are generations who have studied here and others who have gone to school together at the same time.

In this story, we profile just some of Saint Leo’s family connections.

Family plays a pivotal role in the lives of Mercy and Luis Figueroa, of Spring Hill, FL. The couple juggled military deployments, work, family commitments, and studying while earning their degrees at Saint Leo.

“My story starts rough, but ends in the American dream,” Mercy said.

Mercy was born in Havana, Cuba, where her father was held as a political prisoner. Helped by the Catholic Church, her family made their way first to Spain and then to New York, leaving Cuba when Mercy was a toddler.

“The Catholic Church has been involved in my whole life,” she said. “It’s pretty awesome I got to go to Saint Leo.”

She grew up in Brooklyn while Luis grew up in the Bronx. “I took a long train ride to find a boyfriend,” she said. “He was a tall football player with a lot of hair, but I destroyed all the hair!”

Luis joined the U.S. Army first and then encouraged Mercy to get involved. She served in the Army for four years until her daughter Gabby was born prematurely at 24 weeks with cerebral palsy and other health issues.

“She decided as much as she loved the military, she loved her daughter more,” Luis said, and Mercy left the Army to care for Gabby.

Mercy transitioned from active duty military to being a supportive military spouse. Luis, a staff sergeant, left active duty in October 2014, and retired from the military this summer. He was often deployed, and Mercy took care not only of Gabby, but also sons Isaac, who is a junior at Saint Leo, and Connor, a high school senior. “We adopted Connor from the foster care system,” Mercy said.

Luis was stationed in Fort Lewis, WA, and while deployed in Iraq, he read about Saint Leo. “It piqued my interest,” he said. “Then I came down here and realized the campus was close [to the family home in Spring Hill].” In 2011, he began his first semester at Saint Leo, but again was deployed on a high-priority mission and had to take a break. But in fall 2014, he started again and never turned back.

Mercy tried to go to college “a million times,” she said. “Once I got Gabby medically stable, I started.” Luis encouraged her to join him at Saint Leo, and she earned her associate degree in 2016.

The university felt like home. “Once I heard about Saint Leo’s history, the diversity and inclusion, at a time when they didn’t have to accept other races, cultures, that is what made me love it,” Mercy said. “There are people from everywhere at Saint Leo. It is such a great place.”

The Figueroas not only have son Isaac studying at Saint Leo, but Mercy’s sister, Heavenly Aguilar, graduated with honors with a Bachelor of Arts degree in criminal justice-criminalistics at the Tampa commencement ceremony on May 31. She now is pursuing a master’s degree.

For Mercy, what’s next is pursuing a law degree at the University of Mississippi School of Law, while Luis will complete his MBA at Saint Leo in December.

A family finds their home at Saint Leo

The U.S. Air Force brought the Blackman family to Florida, but Saint Leo University provided a home away from home for them. For Derrick and Kimberly Blackman and their son Elijah, Saint Leo offered the opportunity to study together, lean on each other, and cheer for each other—in the classroom and on the basketball court.

The family moved to Tampa from Colorado in 2000 when Derrick Blackman was transferred to MacDill Air Force Base. While on active duty with the Air Force, Derrick took a class at Saint Leo and enjoyed it. From there, it was on to pursuing a degree.

Derrick graduated from Saint Leo in 2015 with a bachelor’s degree in religion. Next up was Elijah, who enrolled after Saint Leo representatives visited Wesley Chapel (FL) High School during his senior year there. It took a little while longer for Kimberly. “About two years later, my husband encouraged me to enroll,” she said. “He said, ‘You’ve already got your associate degree, and Saint Leo is an awesome institution for getting a quality education.’ And it was great! I’m so grateful.”

Not only did Derrick encourage Kimberly, but he also pursued a master’s degree in theology. In 2017, the Blackmans graduated with Kimberly and Elijah receiving their diplomas together at the Saint Leo WorldWide commencement. Derrick received his master’s degree the next day during the morning graduate program commencement, where he also performed the national anthem.

“It was a great honor and privilege to be able to graduate the same year,” Derrick said. “It was even greater for me as husband and father to witness both my wife and son graduate from [Saint Leo] at the same time. The experience was extremely humbling.”

Now, Derrick teaches at Saint Leo as an adjunct faculty member in the Department of Philosophy, Religion, and Theology.

Elijah, who played basketball for the Lions and served as a University Ministry Mentor, earned his Bachelor of Arts degree in sport business. After completing an internship at the University of South Carolina, he now is a graduate assistant for sports strength and conditioning at the University of Arkansas.

Graduating from Saint Leo with his parents made an impression on Elijah. “I thought it was incredible to be able to sit next to my mom during graduation and see my dad walk across the very same stage less than 24 hours later,” he said. “Graduating at the same time as your parents doesn’t happen too often.”

Derrick and Kimberly’s other son, Donovan, graduated from aviation school in 2015 and is working in Arizona. And while they tried to persuade daughter Kandice to attend Saint Leo, she did not want to attend college with her parents and brother. She is enrolled Trinity College of Florida in New Port Richey. 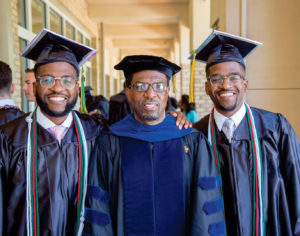 Two recent grads from the Class of 2018 are not only twins, but they also graduated with the same major and held equivalent jobs as residence hall advisors. In another family connection, they are the sons of Sandy and Dr. Okey Igbonagwam, a Saint Leo assistant professor of computer information systems in Virginia.

As an employee, Igbonagwam is eligible for the university’s tuition remission benefit, which is a big plus in helping families pay for college. While the financial benefit was certainly a factor in the decision, Igbonagwam said his sons were also drawn to Saint Leo by the appeal of University Campus. “First impressions matter,” according to Chidozie and Chigozie. They also liked the academics, and both have wanted to be doctors since they were small. That made the biology major with a specialization in biomedical and health sciences a natural fit. The major is offered only at University Campus.

So, the twins came to Florida and got involved with the Pre-Medical Club, the student-run fundraisers for St. Jude Children’s Research Hospital, and research projects with faculty mentors. Since graduation, both have taken the Medical College Admission Test and are hoping to be admitted to medical school.

Despite deferring their dreams, couple graduates together 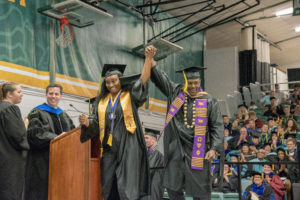 When Sherryl Johnson-Tandy and her husband Erik Tandy walked across the commencement stage together on the evening of Friday, April 27, it was a little out of the ordinary. Sherryl, a corporal in the Pasco County (FL) Sheriff’s Office, completed her Bachelor of Arts degree in criminal justice. So she was grouped with the other adult learners receiving undergraduate degrees in the evening.

Her husband Erik was also graduating with a Saint Leo degree, but his was the Master of Business Administration. The MBA grads are a big group, and are scheduled for the Saturday morning ceremony of commencement weekend, along with those who have attained graduate degrees in other disciplines. But Erik was switched to Friday night at his request so that he and Sherryl could walk across the stage together to celebrate their joint accomplishment.

It was no easy road for the two. They had long wanted to reach these educational goals, but raised a family, so they waited for everyone to be grown and out of the house. It did not quite work out that way. As they went to school, and worked, circumstances required that they also tend often to three grandchildren, ages 5, 8, and 9.

Sherryl has a memory of both the adults studying at night, and then Erik “waking me up from sleeping on my computer.” And she often did the same for him. When their finals were over, she said, it was a blessing to don their robes and receive their diplomas together.