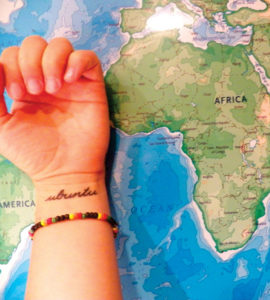 ‘‘Join the Army—See the World” boasts the well-known U.S. Army recruiting advertisement. While seeing the world certainly was a motivating factor for Captain Morgan Mander ’06 to join the military, she never expected she would visit 39 countries during a 36-month assignment in Europe.

With a love of travel instilled in her by her parents, she began an education and career that has led her to places far away from her hometown of Dade City, FL, near University Campus.

Athletic aspirations kept her close to home as she chose to attend Saint Leo University. As a Lion, she played volleyball and tennis along with a few cross country runs. In 2006, she received the Elaine Evans Spirit of Saint Leo Award at the annual National Girls and Women in Sports Banquet, honoring her outstanding leadership and sportsmanship.

Capt. Mander was not solely focused on Saint Leo athletics, however; she graduated with honors with a major in biology and a chemistry minor. Tackling athletics and a challenging academic schedule prepared her for what was ahead.

A love of animals and caring for them steered her to studying veterinary medicine. Besides the usual dogs and cats, Capt. Mander’s mother taught her how to rehabilitate orphaned squirrels, birds, and opossums. She also raised chickens and rabbits through 4-H. While in high school, she worked at the Dade City Animal Clinic.

“I probably wanted to be a vet since I was 3 or 4,” she said. “I even received a white lab coat one Christmas.”

Following her graduation from Saint Leo, she enrolled at the University of Tennessee College of Veterinary Medicine, where she earned the F. Edward Hébert Armed Forces Health Professions Scholarship. She graduated with Doctor of Veterinary Medicine and Master of Public Health degrees in 2010, and entered the U.S. Army as a captain.

While in veterinary school, the travel for Capt. Mander began. For a conservation medicine course—the Envirovet Program—she spent three weeks in South Africa. “One main focus was the One Health Initiative,” she said. “Disciplines need to work together to obtain animal, human, and environmental health.”

That trip spurred her interest in global health. “An estimated 75 percent of emerging infectious diseases come from animals,” she said. “These diseases can then be transferred to humans. An interest in these relationships at their interfaces is what drove me to get my master’s in public health.”

While she unrealistically was hoping for a coastal assignment with the Army, Capt. Mander found herself at Minot Air Force Base in North Dakota after completing her initial training at Fort Sam Houston, TX.

As a military veterinarian, Capt. Mander not only takes care of military working dogs, but also cares for the pets of servicemembers, while providing their owners with public health education. Also, one of the little known duties of military veterinarians is ensuring food safety and security. They check shipments of food and inspect food-processing plants.

Capt. Mander’s most recent assignment found her responsible for veterinary care in Spain and Portugal for three years. She also visited three African countries for work. “But most of the rest of my travel has been leisure travel,” she said.

When her parents, Chip and Deanna Mander, came to visit her in Spain, there was no staying home. “I wanted to go see the world,” she said, laughing. The Manders made a road trip to the Balkans and cruised the Baltic Sea, among other travels. “The off-the-beaten-path places stick out in my mind,” she said of her trips.

Among her favorite travel moments are snowshoeing in Slovenia, hiking in Guatemala, and visiting the tulip gardens at Keukenhof Gardens outside of Amsterdam.

“The toughest part [of her overseas assignment] was being away from family and friends,” Capt. Mander said.

Her biggest regret: not learning the language while in Spain. “I learned mostly food words,” she said of her Spanish skills, “but my schedule was irregular and finding time for the classes was difficult.”

Her time at Saint Leo prepared her both academically and personally for her post-graduate education and career. “I especially appreciate Saint Leo’s core values of community and excellence,” she said.

As a base veterinarian, she experienced the camaraderie of the military family and put into practice the university’s core value of community. The leadership skills she learned on the gym floor and the tennis courts helped her lead soldiers during her last assignment.

Now, Capt. Mander is at Fort Campbell, KY, assigned to a Veterinary Service Support field unit. “The unit is actually currently deployed,” she said, so another trip could be in her future.

She hopes to pursue more travel opportunities and to focus on one-health issues. “I just love learning and trying to solve complex health concerns,” she said.