July 7, 2015. It is a day that will not be forgotten by any of the young men on the Saint Leo soccer team. On that day, they learned that Jules Verdin, their teammate and friend, died tragically in a hiking accident in Switzerland. Verdin, a native of Tongeren, Belgium, was hiking with his family near the Jungfrau in the Swiss municipality of Lauterbrunnen when the accident occurred. Verdin, who wore the No. 5 jersey, was named the 2014 Sunshine State Conference Freshman of the Year and a Second Team All-SSC selection. He had completed his first year at Saint Leo, recording two goals and two assists for six points.

“Jules was like a little brother to me,” said senior Henry Adu, a native of Ghent, Belgium, located just 90 miles from Verdin’s hometown. “When I got to Saint Leo, I dreamt that someone from Belgium would join the team, someone who spoke Dutch and shared the same interests and understood the Belgian lifestyle. From the first day we met, we became connected. We hung out almost every day.”

Adu recalled, “I was in Miami at a CVS store when I heard the news from his mum. I was preparing to fly out of the country back to Europe for the summer. It was the most shocking and painful news I have ever experienced in my life. I broke down in the CVS store crying like a little child. The first person I called was Coach to tell him about it. I had no choice but to tell my teammates about it. The most difficult time was my 10-hour flight from Miami to London; all I could do was cry. I never got a second of sleep. I was just living in the memories and looking at his pictures.”

Rewind to November 21, 2014. The NCAA South Regional Final saw two SSC foes face off for the second time that season as the Lions met No. 3 Lynn on the Young Harris College (YHC) Soccer Field in Georgia. Lynn, the eventual 2014 National Champions, got the better hand, taking the game 3-0, ending Saint Leo’s season. Looking back now, it is fair to say that while ending a season can be tough, that is not why those men will remember YHC Soccer Field. Instead, it was the last time Verdin stepped on the field in Green and Gold.

Fast-forward to September 3, 2015. About 10 months passed since the Lions had gazed upon the YHC Soccer Field, an air of remembrance drifting among them as they took the pitch for the first time in the 2015 season. In a match-up of nationally ranked squads, No. 13 Saint Leo faced host No. 3 Young Harris. The team placed the No. 5 jersey across the bench, the place it would remain all season long.

“We came out flat, and we started the day exactly the same. We fought hard, we continued to battle, but we needed to focus on our composure and technical ability. [It] was very emotional for the team knowing this was the last place Jules Verdin played with us,” Head Coach Keith Fulk said, following the 3-0 defeat.

“This season was an emotional roller coaster for us, but I am extremely proud of every single one of my teammates for staying together and picking each other up”

September 5, 2015. Just two days later, the Lions remained in Georgia for a neutral site game against Lees-McRae on YHC Soccer Field once again. In an opportunity to rid the field of demons that haunted it, Saint Leo entered the game with sharp focus. Less than one minute into the game, the team scored and eventually took the game 4-1.

“It was by far the most emotional week for these kids; they wanted to win so badly. In the first game they came out flat, [but the second game] was the complete opposite. They were outside on their ‘hype zone,’ and at halftime, I got them to calm down. Now it’s time to move forward,” Fulk said after the game, delivering a phrase that sat with the Lions all season.

September 19, 2015. Another memory, another moment. Saint Leo hit the road to face No. 1 Lynn. The same Lynn that bounced the Lions out of the NCAA Tournament the previous season. The same Lynn that Jules Verdin faced in his last game. Sometimes it’s hard to move forward, when forward resurfaces the past. The Lions reveled in this resurfacing, however, as they knocked off the top team in the nation, 3-1, on their own field.

Bonding helps a team in any situation, but in a situation like this? Ultimately the most important thing a team can do is find their way back to the winning course without getting caught up in the emotion.

“This season was an emotional roller coaster for us, but I am extremely proud of every single one of my teammates for staying together and picking each other up,” senior and team captain Matt Campbell said. “Jules was such a huge part of our team. He was not only an unbelievable player, but he was a great teammate and was always willing to lend a helping hand, or give some comic relief when needed. His death was hard on all of us, and I believe it showed at the beginning of the season. It took some time for us to grieve together and learn how to cope with the loss of our brother.”

“… he would have run to the fans and slid on his knees and would start chanting, ‘Champions! Champions!’ All he wanted was to win a trophy for Saint Leo University and celebrate with the team. It felt very special to win something for him.”

Something clicked. Following their 3-4, 1-2 opening to the season, the Lions rebounded, turning in five-straight wins, taking down Nova Southeastern, Christian Brothers, Embry-Riddle, Tampa, and Florida Southern. They turned their record to 8-4, 4-2 in SSC, finding themselves right in the race for the SSC regular season title, with three games left, two in conference.

A game with Stetson, a Division I foe, ended the winning streak, but it was trivial in the ultimate storyline, as the Lions followed that Monday game with a Thursday game versus Eckerd, and a Saturday game versus Barry.

The Lions downed Eckerd, 4-2, in a heated battle, giving Saint Leo an opportunity to play for the championship.

October 31, 2015. Heading into the match-up with Barry, there were four teams that could earn the No. 1 seed for the SSC Tournament and the regular season title, depending on how Saturday finished. But the Lions had the upper hand. This was the final game to be played in the SSC regular season as all other games had already taken place, and Saint Leo knew that a win or a tie solidified their spot as the regular season champions.

Once again, the Lions took the pitch, with the No. 5 jersey on the bench. Eighty-five scoreless minutes passed before Barry lined up for a corner kick. The ball sailed off the foot of the Barry player, crossing the goal box, finding the head of a teammate who knocked it in. It seemed as though the Lions’ chances had ended with just five minutes of action remaining. But if there was one thing the Lions had learned over the season, it was resiliency. And resilient they were, as they charged down the field, earning a foul outside the box, giving Saint Leo an opportunity to score. Junior Maximilian Schulze-Geisthovel stepped up to the ball to take the free kick, blasting it past the wall of defenders, but Barry’s keeper was there to block the shot, sending it straight to the foot of freshman Yuga Yanagisawa, who was trailing the ricochet. Yanagisawa sunk the rebound and tied the game. Maybe it was divine intervention, fate, chance, destiny, or someone watching from above—call it what you may—but the Lions capitalized on the opportunity in front of them and hung on to the tie through the final three minutes of regular play and two overtime periods. The Saint Leo Lions were named the 2015 Sunshine State Conference regular season champions. 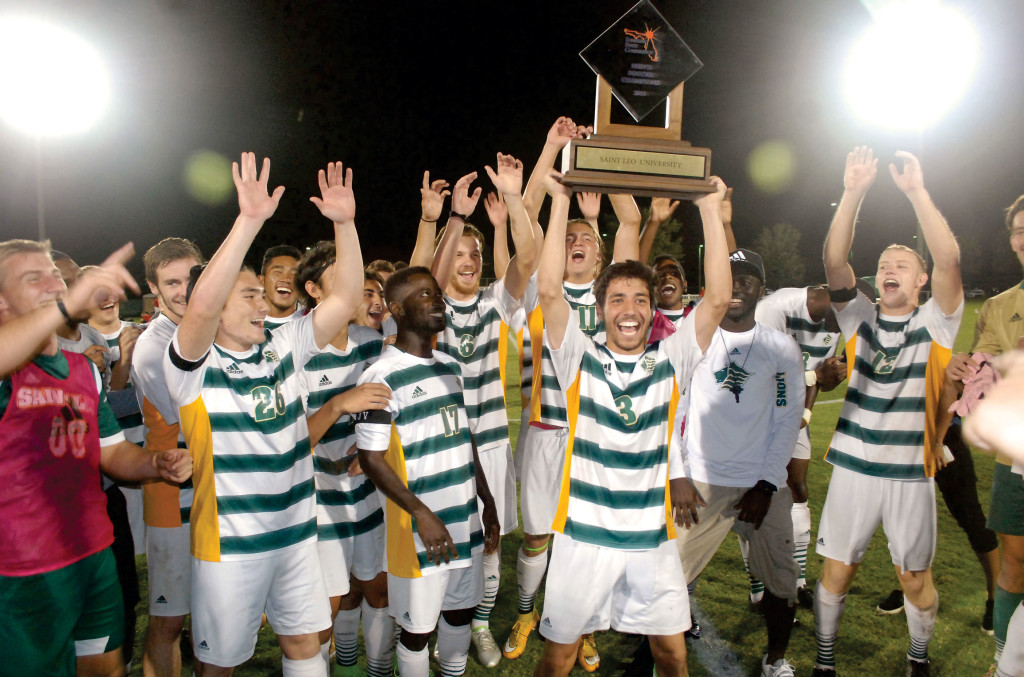 “Oh, my gosh, that day! This was the very first time I cried in front of the team about Jules,” Adu reminisced. “I thought, ‘What would he do if he was here?’ Knowing him very well, I know he would have run to the fans and slid on his knees and would start chanting, ‘Champions! Champions!’ All he wanted was to win a trophy for Saint Leo University and celebrate with the team. It felt very special to win something for him.”

The path to success is usually not a paved road; for the Saint Leo men’s soccer team, a single day in October proved that no matter what happens, you can find triumph in any tragedy.

Jake Gilmour
Men’s Lacrosse • Sophomore
Pickering, Ontario, Canada
Jake Gilmour had an immediate offensive impact for the Saint Leo men’s lacrosse team in his rookie campaign with 28 goals and a team-best 14 assists for 42 points, second on the team in scoring. He scored at least one goal in all 14 of the Lions’ games in 2015, and charted four goals in games against Adams State and Lynn. A Sunshine State Conference All-Freshman Team honoree, Gilmour’s five assists versus Lees-McRae was one shy of the school record.

Jonathan Glenn
Soccer • Class of 2011
Iceland
Jonathan Glenn was a member of the Trinidad & Tobago men’s national team that reached the quarterfinals of the recent CONCACAF Gold Cup. Glenn was one of the leading scorers in the Icelandic Premier League in 2014 and recently moved to Breiðablik.

Amanda Jakobsson
Women’s Golf • Sophomore
Gothenburg, Sweden
Amanda Jakobsson joined the Saint Leo women’s golf team for the Spring 2015 semester, and immediately became a dynamic force on the team. She finished the season with a team-best 76.11 stroke average over 18 rounds, and was tied for fifth at the Sunshine State Conference Women’s Golf Championship with an eight-over 224. Jakobsson went on to shoot a 227 over three rounds at the NCAA Super Regional, finishing 19th overall.

Jordan Pendleton
Baseball • Sophomore
Palm Harbor, FL
Jordan Pendleton started off his freshman year battling for the third spot in Saint Leo baseball’s weekend rotation, and finished the year in the No. 2 spot with a stellar freshman season. He logged a 7-1 record with a 3.73 earned run average over 60.1 innings pitched, including Sunshine State Conference wins over Eckerd, Rollins, and Barry. Pendleton finished the season with 34 strikeouts, and was a Second Team All-SSC selection.

Abbie Ross
Women’s Lacrosse
Sophomore • Orlando, FL
Abbie Ross turned into a scoring machine for Saint Leo women’s lacrosse, charting a team-best 29 goals and three assists for 32 points in her rookie season. She scored in all but two of the Lions’ 15 games in 2015, including hat tricks against Pfeiffer, Bloomsburg, Newberry, and No. 10 Limestone. A Second Team All-Sunshine State Conference selection, Ross scored 29 goals and is tied for second among single-season goal leaders in the program’s 4-year history.

Alana Tabel
Softball • Senior
Loxahatchee, FL
The No. 1 pitcher for Saint Leo softball, Alana Tabel finished her junior season ranked No. 1 in all of Division II with her 0.94 earned run average, after allowing just 18 earned runs over 134.0 innings pitched. Tabel posted a 16-5 record during her junior campaign, and recorded 105 strikeouts in 2015 after recording 144 Ks during her first two seasons combined.