For F. Tobias “Toby” Tedrowe ’87, the Saint Leo University Campus is a special place. His parents were both professors at Saint Leo College, he earned dual degrees in business literature and business marketing from the college, and it is where he met his future wife, Kathy (Myers) Tedrowe ’87. It is also where he spent his childhood—swimming, fishing, and sailing on Lake Jovita, running through the orange groves, and skateboarding down the hill. “I had free roam of the place and I knew all the teachers,” Toby said. “A lot of people here influenced me.” 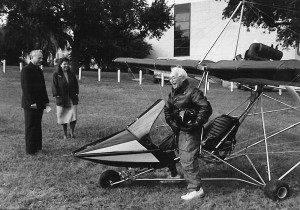 His father, Thaddeus William Tedrowe, was a decorated World War II bomber pilot and a prisoner of war. After receiving his MBA from the University of South Florida, Thaddeus taught accounting and finance courses at Saint Leo in the late ’60s and early ’70s, and later became the head of the school’s business division. He was instrumental in making the Saint Leo military education program a reality at the Avon Park Bombing Range in 1973 and later at MacDill Air Force Base. After retiring in 1981, he regularly visited colleagues at the school and would fly his ultra-light plane into the Bowl to deliver his yearly donation (pictured above).

Toby’s mother, Dorothea ’73, a survivor of Nazi Germany, was the first German Jew to work as an interpreter for the Americans after the war. She arrived in Tampa in 1955 and helped establish the library at MacDill, where she later met her husband. She taught in private schools and eventually needed a higher education degree so she decided to attend Saint Leo where she earned her psychology degree. Dorothea went on to work in private practice and later returned to her alma mater as an adjunct professor of psychology, eventually retiring in the late 80s due to health issues. “My mom was an incredible teacher and her students really loved her,” boasted Toby.

Thaddeus and Dorothea Tedrowe were married for 42 years until his death in 1998 at the age of 78. She died six years later in 2004 at the same age.

Toby’s parents set a good example, so it was fitting that he met Kathy at Saint Leo. The two first spotted each other on an ROTC recruitment camping trip in 1984. At the time, Toby was a 19-year-old sophomore, and Kathy, who enrolled the previous year as a biology major, was 21. At first, he says they hung out together because Kathy was a good cook. Then they started dating and spending more time with one another. They were married on August 25, 1990, three years after they graduated from Saint Leo and the same year Toby graduated from the University of Baltimore Law School. Today, Toby is corporate counsel for Good Times Cigar Company in Tampa, and Kathy, who home-schooled all three of their children, still enjoys cooking, as well as reading and spending time with their family.

The Tedrowe family connection does not end there. Toby’s brother, Thaddeus Stephen Tedrowe ’81, graduated from Saint Leo, and his brother-in-law, Patrick Myers ’94, and sister-in-law, Allison Myers ’94, are also both proud Saint Leo alumni. Toby and Kathy’s oldest child, Hannah, currently is enrolled at Saint Leo through the Center for Online Learning.

Reflecting on his military service and summarizing the Tedrowe family legacy, Thaddeus once told Toby that he wanted to focus his energies on “building things, not destroying them.” Toby explained, “He always said his greatest accomplishment was that he became a professor.”