Saint Leo University unveiled its newest amenity, a 12-station Esports Arena, in March, in Apartment Building 5 at University Campus. The arena serves as the home to the university’s new esports team, and when not in use by the team, other students may use the state-of-the-art gaming stations.

Esports is one of the most rapidly growing sports and is on track to surpass $1 billion in revenue this year, according to Business Insider’s Esports Ecosystem Report 2021. 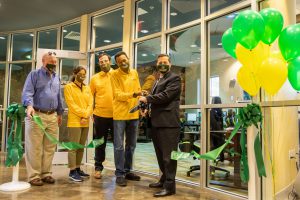 Saint Leo’s esports team is a school-sponsored and funded club sport that fields competitive teams in League of Legends, Rocket League, and Super Smash Bros. Ultimate games. People worldwide can access the Lions’ play via Twitch while others can watch via TVs in Building 5’s lobby.